• to find out which version of the game you're running (aside from the 7 digits at the bottom-left side of the main menu), use Cheat Engine to scan for ChangeList string 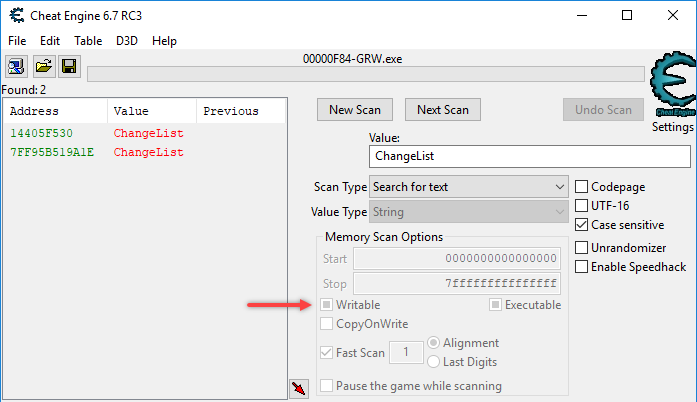 • these are the dumps I have so far (GRW.exe is the current executable):

Also, since some are perhaps curious, while for some it will be just an information "I've seen somewhere":

The game engine, which is externally marketed as Anvil(next) but is called Scimitar internally, for Assassin's Creed is coded mainly in C++. At the time I was at Ubisoft (which is 2013), they were developing a programming language with syntax similar to C# with many more extensions useful for game development (built-in support for writing state machines, partial class definition in multiple files) but with semantics from C++ (zero cost abstractions, etc.) and they were looking into integrating that language with Anvil.

The main game editor, internally also called Anvil (confusing, I know), is coded in C#. This game editor is a graphical UI for the game designers to design each level by dragging and dropping in game elements (like the towers that fire at your ship, or platform for the assassin to climb onto, etc.). The game engine supports a graphical scripting language used by the game designers to script out each in-game sequence. The designers create scripts using the Anvil editor. When a designer pushes the Build button on the Anvil editor, everything (including all the in-game objects, all graphical scripts, etc.) are serialized into an image which is then run by Scimitar.

Thought I'd toss this in.

Acquire Skill Points Pointer - enable it, open J menu, then change the sub-item's value in the table to the amount of Skill Points you want

Add 100 Million To Tagged Resource - once enabled, tag anything you find to get 100.000.000 of that particular Resource; you can then turn it off Works with the official version as well: You may re-download the table from below.

Without any further ado, get table, run game, open table, enable [Gather Intel] script, then pick your choice. Note you have to be in-game for initialization script to work properly (run game, get in-map, alt-tab, Cheat Engine, open table, enable script; then the rest can be enabled at any time).

Invisibility|God Mode feature has double-effect: it will render you invisible to any AI (just invisible, you can still be heard!). Works in conjunction with God Mode (you can have both enabled at the same time, no worries). Will add later on Stealth that fixes that (though it takes away any glimpse of challenge if nothing blows up or people yell scared).

Table works with version 2355883 only (might work with future ones): Play nice. Will add more as I progress.

Hey man thats great. This one the only working cheat table/trainer I've ever found. Good work but I didn't figure it out for Edit Resources and Edit Skill points. Is it under the debugging section?
Top

Cool man! I really wanted to see this game on cheats. This game grinding as F!
Top

Is it still risky while using it online?

Thanks for the table, great job ! It remains to add functions to resources, and teleport

ofcouse there is. Best to avoid ban is completely disconnect from internet. With EAC disabled still not sure that you will get flagged or not.
Top

Wonderful.
Wonderful.
Change your Tier One Experience.
Thank you.
Top

Will update as soon as I get more time to poke at it. Also, note that with Unlimited Ammo|Items on, you don't need to enable No Reload as well

Maybe also add Time fast forward and backward too? _Vee has it but seem like not really working now.
Top

Took your work and changed little

From Tierone to higher experience?
Is it possible to measure infinite quantum numbers from Tierone?
Top

leseho wrote: ↑
Fri Aug 25, 2017 1:48 am
From Tierone to higher experience?
Is it possible to measure infinite quantum numbers from Tierone?

Might be possible if we find the right pointer. Most value in this game is client side anyway.
Top

leseho wrote: ↑
Fri Aug 25, 2017 1:48 am
From Tierone to higher experience?
Is it possible to measure infinite quantum numbers from Tierone?

Might be possible if we find the right pointer. Most value in this game is client side anyway.

I found the address with a cheat engine.
However, changing numbers does not apply.
Isn't it possible to change your experience to a cheat engine?
thx
Top

I want resource cheat for upgrading the weapons. I got all skills unlocked. Tier 19 but I wanted to level 30 some of my loadouts. It is really painful to chasing cargos. Is it possible?

And @Wingman, your upgrade seems great but Skills&Resources ignore option won't work. I mean it is not able to mark it anyhow.