2.041.0v2 table-->>Added Infinite Shields, Infinite Laser Energy which I missed (thanks ZoDDeL), and distance hack for Borehole Torpedo/Gas Miner/Scavenger Drones so you can use them as far away as you can target them. Also adjusted the rapid fire guns script to a lower value to make it more apparent and left notes on how to make it fire even faster: just open script and lower the .20 to .10 or .05, etc. lower value=faster rapid fire. Look on page 8 or 9 for a demo video of how to adjust rapid fire.

2.041.0-->>>A complete redo of MOST of the options.: Reorganized the table into sections, added a compact mode script, Added rapid fire guns, Equipment cost zero, Instant Scanning, and maybe a few other things. Took FOREVER. Check out the new screenshot of options.

1.400.0v2 ->>Added ANOTHER option: to 1.400.0 Codex/Steam (hotfix)
Added: Unlimited Super Capital Ships (Build as many as you want). Just keep clicking add to que. Removed the supercapital mod as it was just a lazy hack anyway. If you are using my old supercapital mod just deactivate it, it hasn't been updated anyway. Proxima Easy mod still works just fine also

Updated to 1.400.0 Codex/Steam (hotfix) & Also works for Cycle of Warfare DLC and the other DLC
-added a NEW option: Instant Boarding Actions: (Gets rid of waiting bar when moving from Room to Room While Boarding)<<-- You will like it!
Ok fixed/Corrected a LOT of things that were broken/not working. Removed experience. Added Infinite Hull to temporarily replace Godmode until
Schnitzelmaker fixes it (and Free shipbuilding if he wants). Everything other than those two options should work - if it doesn't post here in thread so I can fix it.

PROXIMA CHEAT MOD
Easy Proxima (takeover planet) Mod (get it and follw directions in the zip file:
you just have to clear hostile fleet from area destroy ONE anomaly generator. Scan anomaly, then destroy ONE defense platform and you can summon Proxima. Proxima will appear and instantly be ready to fire! Enjoy!

Added "10 million Command Points" (Schnitzelmaker) and "No Range Limit on Ability Use"-This lets you use your offensive abilities (like Execute) from any range. Note:Execute and Expose effects work from any range, other abilities like Overload and Shotgun will still fire but won't damage target until much closer to the target. If issues with Command points option then I also found an alternative address for them. Let me know.

Updated to 1.030.1 Version2:
Added Schnitzelmaker's improved Godmode and Troopers Always Ready options. Added my 150 Endurance on Advance (during boarding every time you advance you get 150 endurance - means you can always take a ship) and my Ignore Biometric Shields (Board the same ship as many times as you want) options.

Updated to 1.030.1:
Added 4 new scripts. May have to land on planet or load game after activating for them to show up/work):
Set Transporter Range (100,000)
Set Sensor Range (100,000)
Set Grappler Range (100,000)
Increase maneuverability (Currently Set High at 4.0) - !First MUST Mount Any Maneuver boosting enhancement <<<<--- What this does is change the maneuver enhancement to 4.0 (you can set the amount in the script.) So say a propulsion enhancement says it increases maneuverability by .30, well this does it by 4.0. Has to have a propulsion enhancement that changes maneuver for it to work though. With that option you can have a carrier handle like a corvette. Set the 4.0 option to what you want in the script. 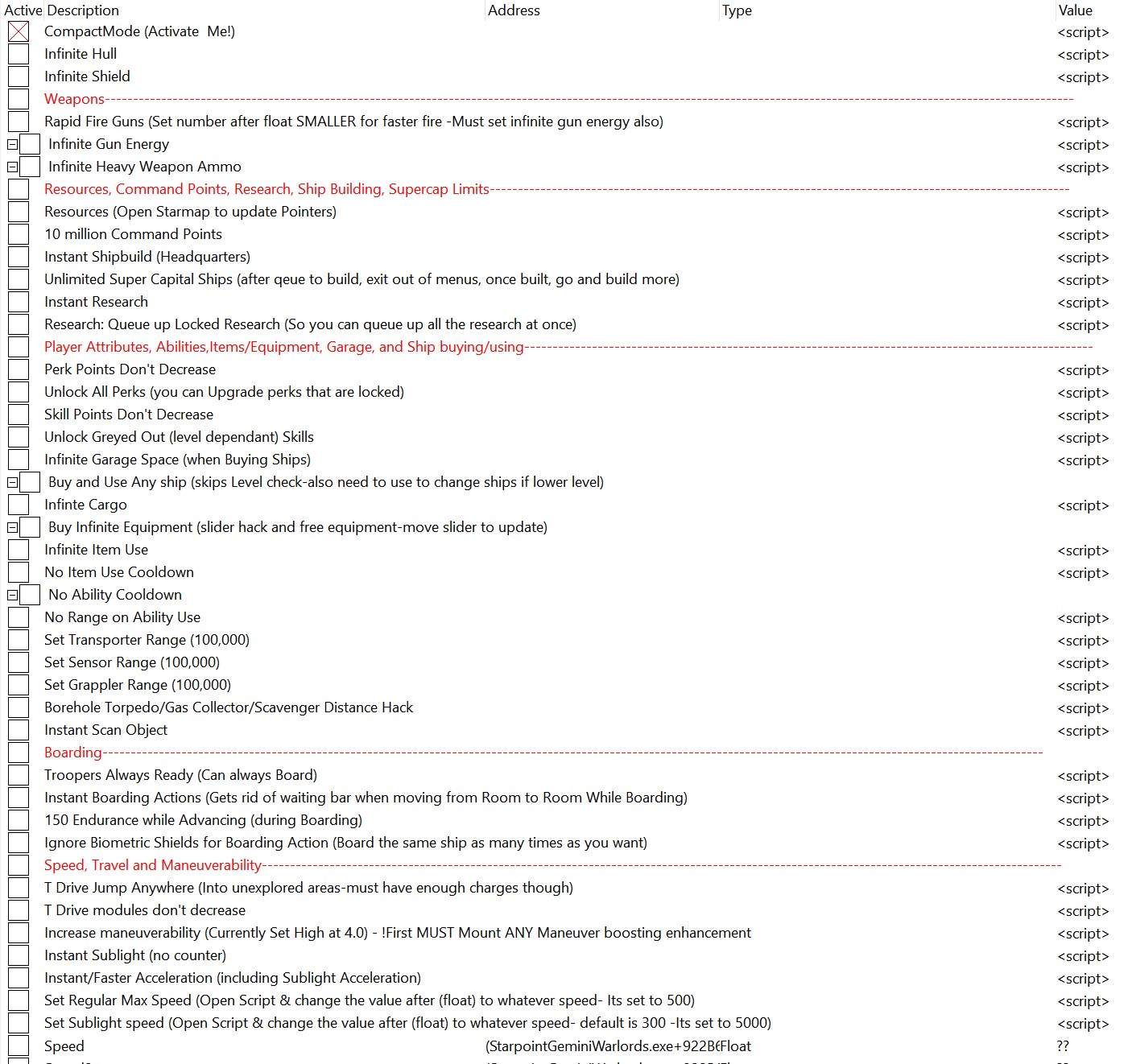 G25_StarpointGeminiWarlordsV.1.400.0v3.CT
Added Alternate No Range Limit on Ability Use option for those of you who cannot activate the No Rang Limit on Ability use option I had on there. Just the normal or the alternate- whichever works for you.
(487.75 KiB) Downloaded 2392 times 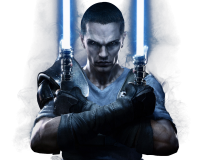 Yeah i'm gonna stick with my game on 1.0 version so i can enjoy this table :p thanks for the 1.0 upgrade ^^
Top

I can tell you that all the values that are not scripts on that table are green/static values and are easy to find (they don't have pointers). The scripts use AOBscan (most of them) but it looks like I might update the game to 1.010.1, fix the table I just did fricken yesterday and then add options to it. Here is the thing:
If I do this I will work on adding new options to this updated version only for a while. I'm not doing it every two days if they decide to put a patches out every couple of days. Hopefully only the static items changed and not all of the AOB scripts. That will make it relatively simple. But don't have an ETA on it yet as I have a lot of things to do this weekend.
Top

They changed everything. Could be a while as im busy this weekend cause looks like I have to redo the entire thing again. Just use the 1.0 version of game for a little while.
Top

Hopefully if you use AOBscans for everything they won't change up too much... Hopefully.

Love your work mate, waiting for the update

Good, most of the cheats work, but when I used the cheat for T Drive modules don't decrease, It end up crashing upon using T-Drive... I also have other cheats active as well that could be potential CTD that is the infinite item use and no item use cooldown....

edit: I think the culprit is the infinite item and possibly the no item cooldown, I've selected a derelict, used my swarm, instant CTD.
Top

Its the item use cooldown thats crashing. Strange its crashing for me now but was not earlier. Ill work on it and post an update here when fixed.
Top

Also that No More Then One T-Drive Charge cheat also crashed upon usage, once it got to the map, it's instant CTD...
Top

Please try out the fix I just put up. And let me know if anything crashes and what option crashes if so. Thanks!
Top 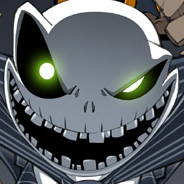 With the current game version I have an offset of 0x3000 for all the entries.

What version is that? and Steam? Money and Hull and the plain values on the table are green static values. There are no pointers for them.
Last edited by gideon25 on Sun May 28, 2017 2:44 pm, edited 1 time in total.
Top