**Build 2021.03.25B** **Fixed a possible issue with Fast workspeed script**
**Build 2021.03.24A** *Fixed several broken Scripts*
1. Added missing countries, Awards , and studio rating under the MAIN script. What IS studio rating?
**Build 2021.03.18B** *Fixed SCript*
Added/Changed:
[1.] Massive Production now works for Contract work
[2.] Company special Genre under MAIN script
[3.] Added New countries under MAIN script
[4.] Removed Max platform tech level 10 and replaced it with: Dev Game Force Engine Tech level 0 (Develop Game Choose Engine). This way is easier. Your owned engines, no matter how many features, will always be tech level 0 so you can always use any engine with any platform, including contract/commissioned work. No need to try to change the platform tech level.
**Build 2021.03.14A** Added:
[1.] Massive Stockroom space (1 Billion)
[2.] Massive Production (each production machine can produce up to 1 million per "turn"<--used to be 5000, so just set everything to max and automatic)
[3.] Added the new Countries to the Main Script-Countries
[4.] Increased the Amount of speed for the Fast True Workspeed script. AAA games were taking too long

**Build 2021.03.12A**Fixed Scripts. Thanks to Axpro for organizing, formatting, and added descriptions to the table!
1. Added Massive Heat for heaters and no server heat (it works now and you only need one heater for most rooms if you place it properly).
2. Combined Max Experience Platforms, Max Experience Genres, & Max experience Topics/Subtopics into 1 script.
3. Axpro added a drop down menu for Country under the MAIN script.
4. In order to have the Highlight Matching topics to Genre you Need to have Created at least 1 Game Report in that Main Genre before it will take effect for that Genre. After that it will highlight ALL matching topics for that genre.
**Build 2021.03.10A**Fixed Scripts.
Added:
**Table will ask if you want to attach to process when you open, say yes and then you can just activate the script without having to manually attach table (assuming you have the game running already.**
[1.] I didn't like how slow even the high speed setting was so now you can adjust it: High Speed Game Speed Adjustment (Change how fast the High Speed Game speed will go) Hotkeys Numpad +/ - to increase/decrease speed..Don't go too high (like over 20..don't know if it will break game

[2.] Force Highlight Matching Topics/Subtopics to Genre When Developing Game<-need to have done one Game report in the (main) genre.
[3.] In the "Main" script can now change/edit global events and how long they last. Dropdown select
[4.] In the "Character" Script can now change occupation for selected character (Developer,graphic artist,etc.) Dropdown Select
FIXED Sequel sales calculations. Sales will now be calculated normally for sequels when the Perfect Critic Reviews Script is on. ADDED: Unlock all furniture (no need to change date), No server Heat, Massive Server Space
ADDED some groupings to the MAIN script and ADDED TRENDS for Genres. Each number corresponds to a specific genre . I have SOME of them in the Genre by Fans area of the table. EDIT Filled in all the genre names/numbers and added drop down table to trends section. You can change the Genre trend/antiTrend on the fly or put in 0 weeks until it changes and it will change the next week..whatever.
3: Added Stop/Freeze Time (turn off before you "Finish Development")<--don't know if it affects anything else so experiment
[2: Added Max Hype for all current games
3: Added Perfect Critic Reviews (done in the code section it actually calculates it, not afterward)
4: Added No Negative User Reviews
5 Added Edit/Add # of Fans (by Genre)
6: Added Increase Frequency of Job Market Generation + all Legendary for newly added ones. What this does is increase the frequency that the game add employees to the Job Market AND all those that the game adds will be "Legendary" It doesn't affect the ones already in the market but I think as more get added the old ones leave the market.
Added Remove Level Caps script: Activate then edit your NPC characters stats with the character viewer, let run for a few weeks and then save game and can deactivate script. Should be permanent then. EDIT: Your Main Player Char still reverts so Keep this ON after editing Main character..the npcs don't seem to revert. Game is buggy. MAY have something to do with the fact that my character has the TALENTED perk, I did not test. Best to remove and not use Talented or All-Rounder Perks
Needs and Motivations- Broken out into different scripts for testing and did not make scripts for things not used yet
Zero Cost Employees--> Just what it says 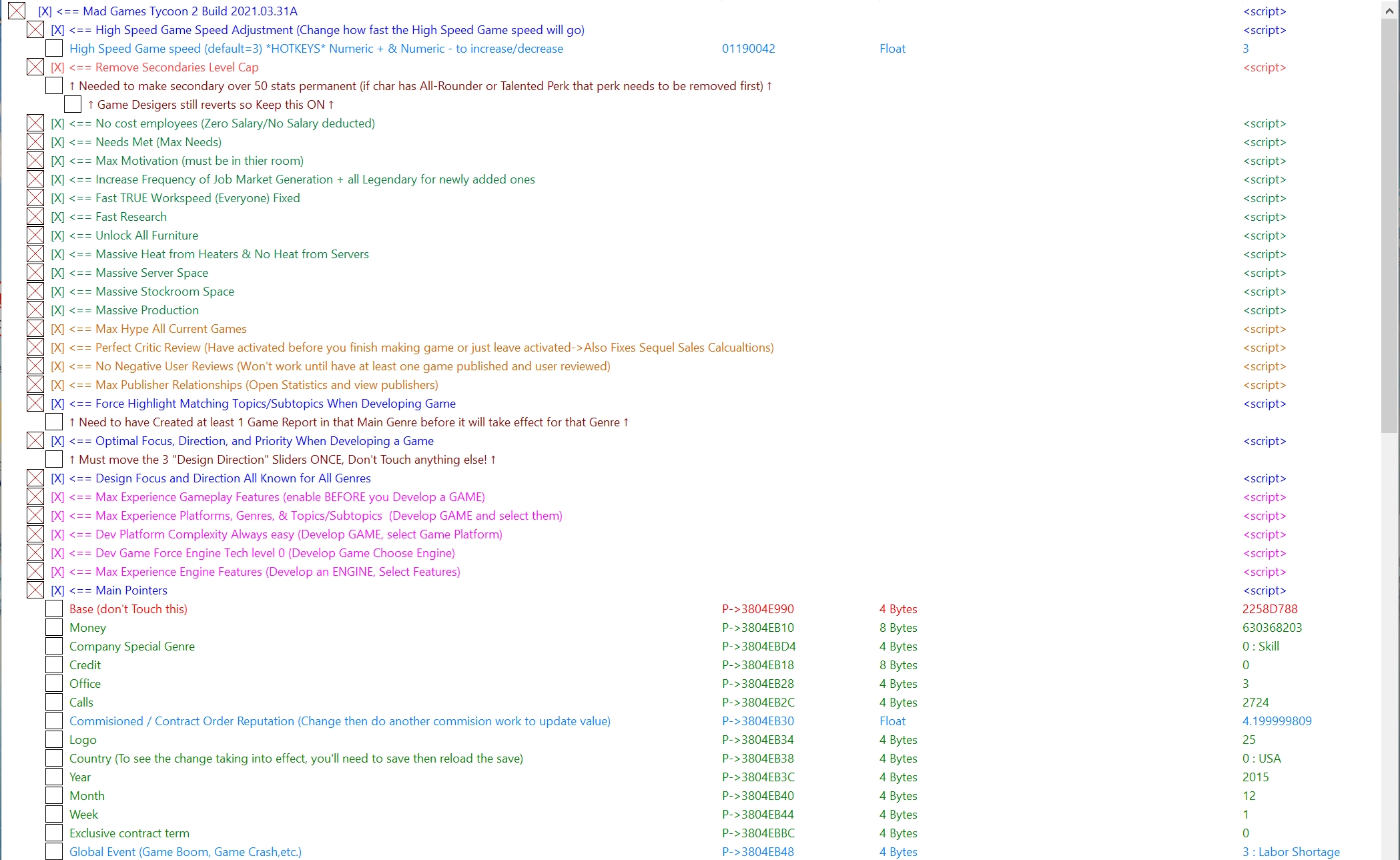 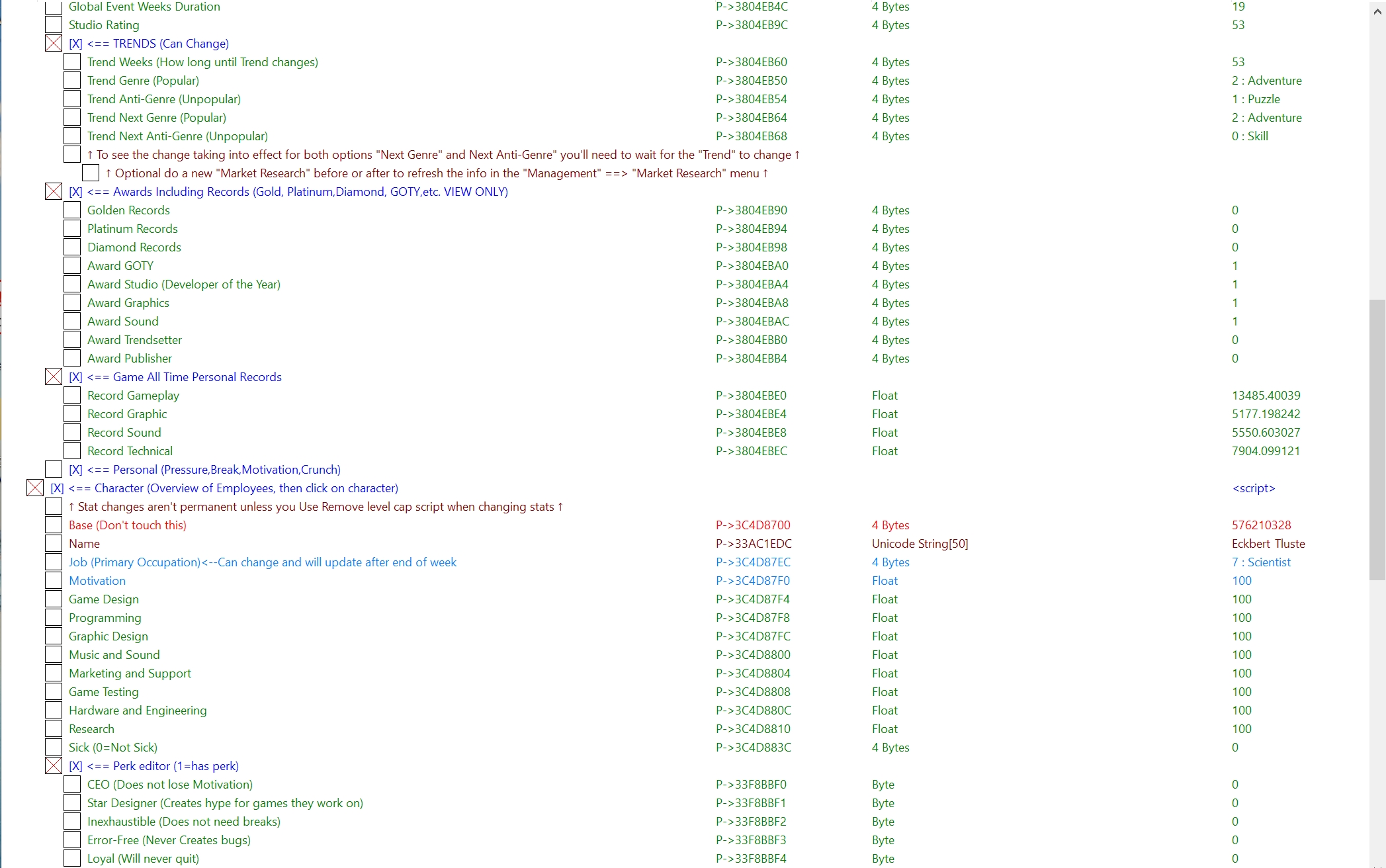 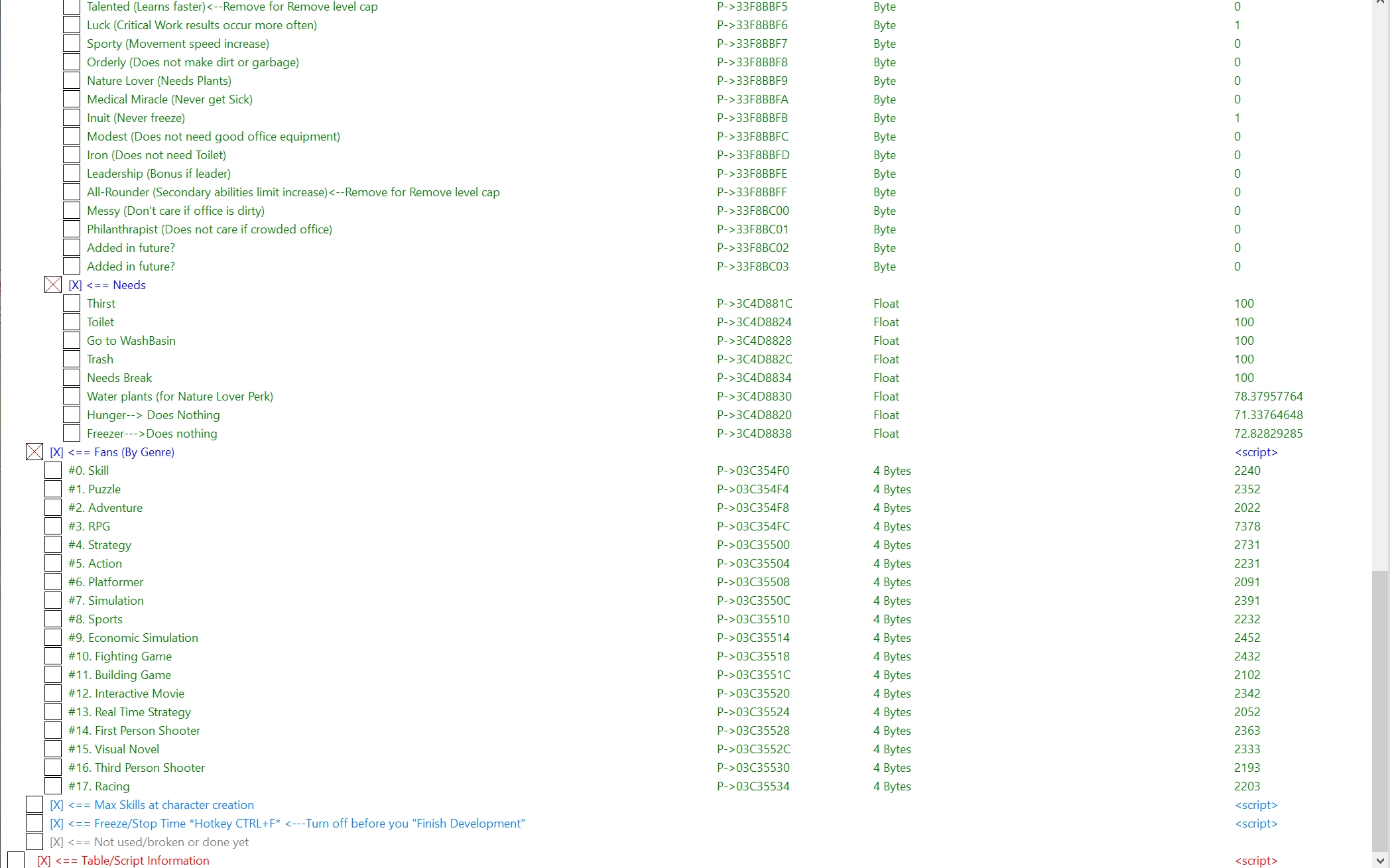 BEST DISINGER
What is cheating?

Skills work well, but stats (motivation, hunger, toilet, etc.) are useless. They still shrink and the characters go to drink water/eat, etc.
Well, only if you do not constantly click all the workers.
UP 2021.02.04A came out and everything seems to be working.
Top

All of it is working great! Loving it so far!

One request, can we get a max experience upon working on topics, genres, etc?
Top

BTW, what does technology level do?? I mean for specific items.
Top 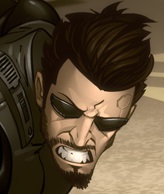 Thank you for the table it is working perfectly. I have 2 weird requests. Weird in the sense that I'm not sure if they can be done.
1. Fast Grahpic Studio/Sound Studio/Improve Gamplay
2. Modifying an employee's perks
Top

Tahtawy wrote: ↑
Fri Feb 05, 2021 1:41 am
Thank you for the table it is working perfectly. I have 2 weird requests. Weird in the sense that I'm not sure if they can be done.
1. Fast Grahpic Studio/Sound Studio/Improve Gamplay
2. Modifying an employee's perks

Ok, found the perks, done..I THINK I understand how to do fast tasks.. So once done I will update later tonight with a perk editor and some fast tasks for various things (we'll see which ones).
Top

"Needs (and Motivation) Always Max" is very buggy. In addition to visual bugs, it stops the work of employees. Helps to disable the option, take the employee and put him back in place.
Top

Kaedus wrote: ↑
Fri Feb 05, 2021 6:25 am
"Needs (and Motivation) Always Max" is very buggy. In addition to visual bugs, it stops the work of employees. Helps to disable the option, take the employee and put him back in place.

Yea.. It was two scripts in one. I broke it apart and now its just one area where it hooks in. Needs testing though. I would like to know if you look under the character editor what needs (in the character editor) does the character actually stop working for anyway? Its possible some of the things Im maxing out have not even been implemented yet and maybe messing something up?

Anyway added a LOT more scripts and a perk editor. Test away. Lots of perks make the worker immune to certain needs/effects also.
Last edited by gideon25 on Fri Feb 05, 2021 7:44 am, edited 2 times in total.
Top

Tahtawy wrote: ↑
Fri Feb 05, 2021 1:41 am
Thank you for the table it is working perfectly. I have 2 weird requests. Weird in the sense that I'm not sure if they can be done.
1. Fast Grahpic Studio/Sound Studio/Improve Gamplay
2. Modifying an employee's perks

Done. test them out. I keep getting carried away forgetting this thing is in alpha

and will have to be updated a LOT..but at least if I decide to stop updating it the scripts show how to do everything for other script makers.
Top

They are all working perfectly. Thank you so much. The Perk Editor is amazing. I have not tested the new motivation/need script yet. However, there is no need for max motivation, since we can use the perk editor to give all the employees the CEO perk which prevents motivation loss (with the side effect of $0 salary).
Top

BEST DISINGER
What is cheating?

Changed Needs and Motivation script.. Still needs testings
Added:
Perk Editor: (under character editor) 1 means they have the perk. Can remove/give any and all perks although more than a certain amount and gui runs out of room
Max Experience gameplay features (must select BEFORE you develop a game)
Fast Speed scripts for:
Fast QA (Bugfixing, Improve Gameplay, Game Report) , Sound Studio, Graphic Studio, Marketing Research and Campaign, Fan Campaign (support), Animation, Engine Development, and Main Game development/Creation (that last one is experimental)

**Updated** for 2021.02.04A
added:
One script Max skill stats (everyone, everywhere)-->I made this cause I noticed a savegame where they reverted, so this will max them every turn.
One script Max needs (and Motivation) Note: This cause some icon graphic anomalies, so you can toggle it off and on with the hot key and it will max everything in one turn)
Max Experience Genres, Subgenres, Topic/Subtopics, and Engine Features.


BTW, you can set your year to like 2050, let the turn finish and all the furniture will unlock. Buy everything you need, then set year back to your previous date 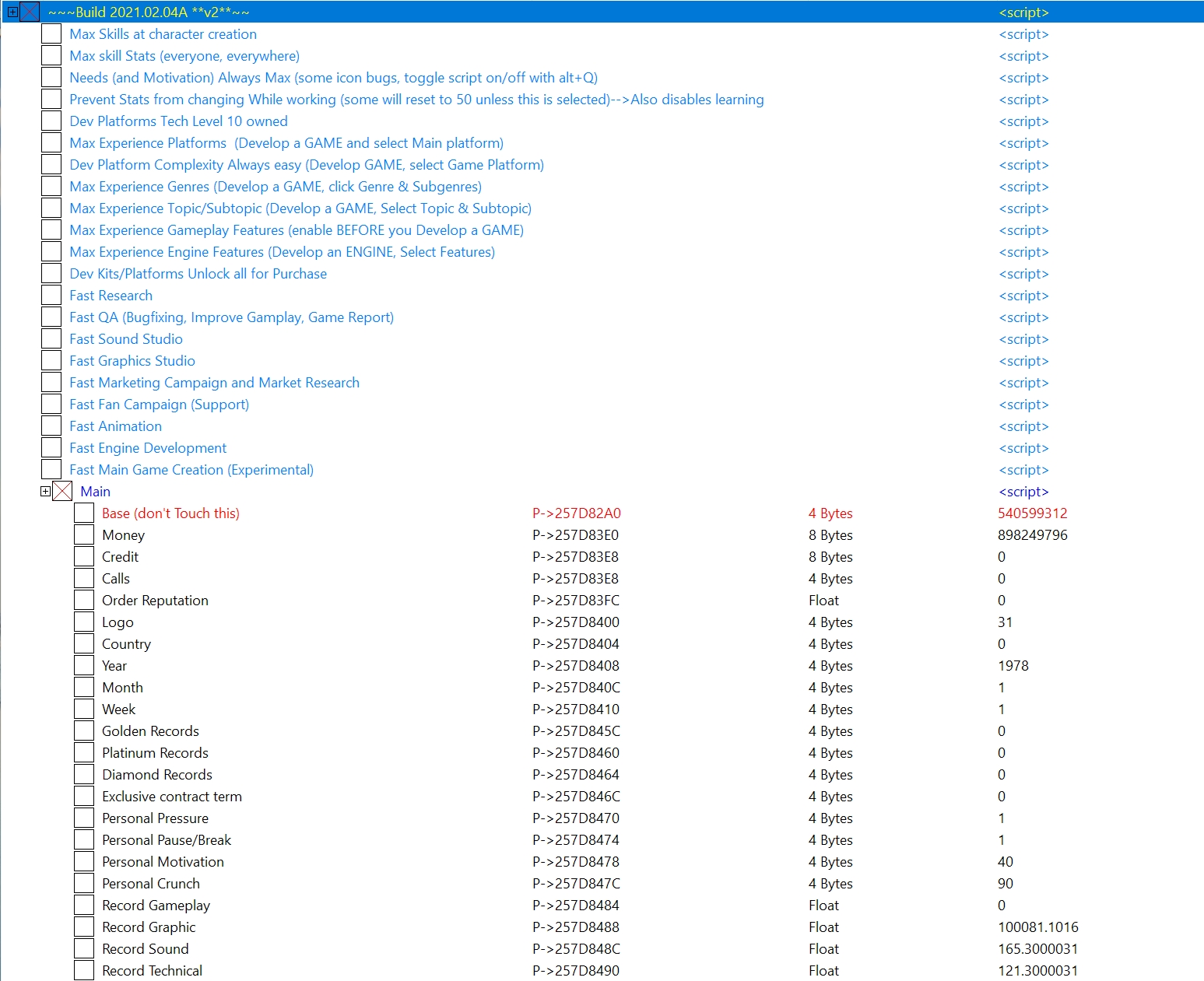 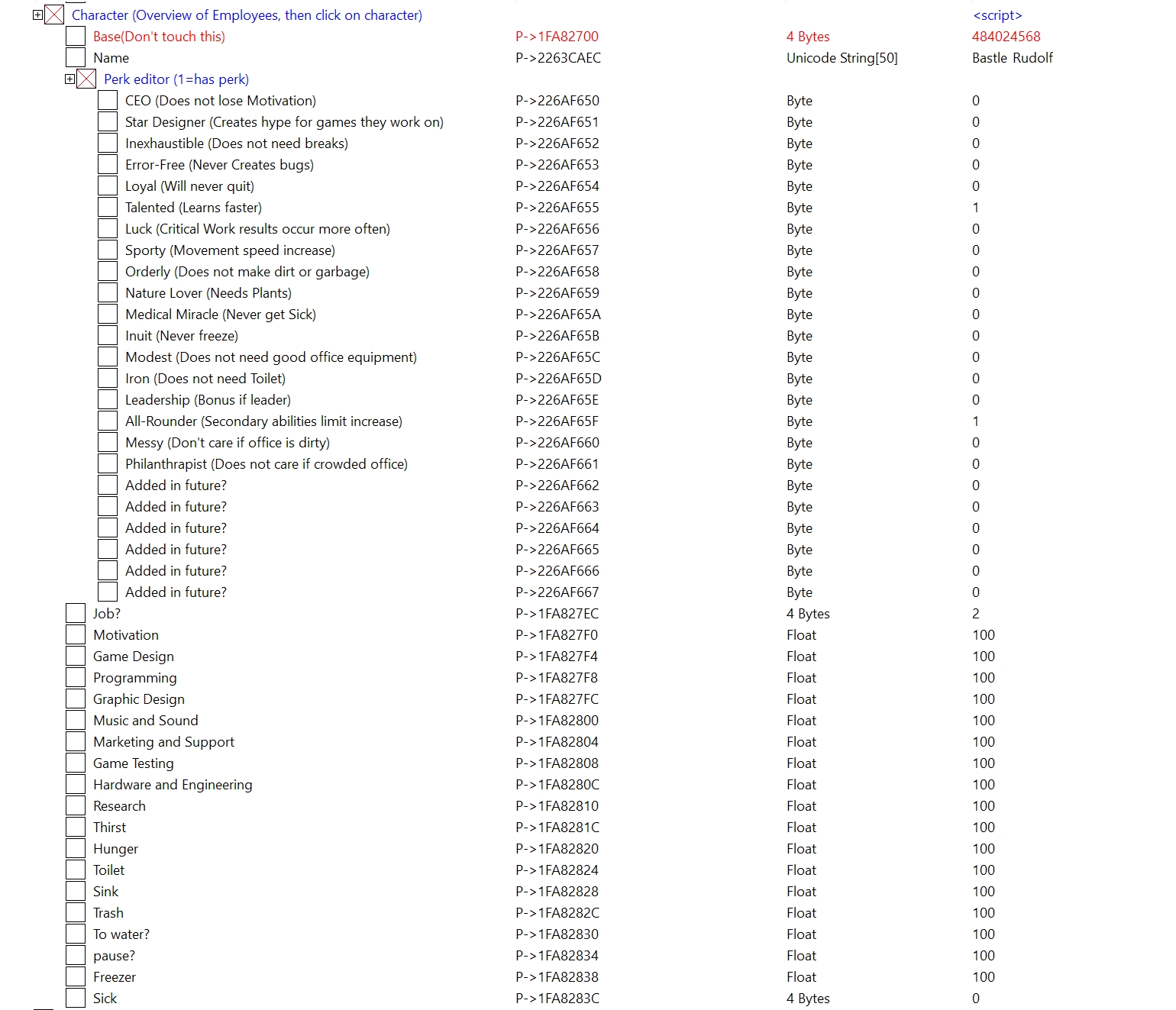