Alright, went through the process of patching in the console commands/variables flags so they are not executable. Below is a list of all the commands and variables you can run in the console, AFTER enabling the "Console Goodies" script. To dump all of them, I used the "[CE Lua Console] Log Commands/Variables" script.

I've done some work in the past for this game, pulling up some nice options and, if I recall, a table in this topic. I've recently started replaying the game, after finishing Zombie Army 4, as I wanted to finish a project I started: mapping all collectibles' locations and a nice teleporter. Furthermore, I've discovered in ZA4 that you can use the weapon scope (sniper, pistol, etc.) while zoomed to pin-point the XYZ coordinates of the spot you're aiming at. That + player's XYZ = teleport to scoped location

So I wanted that in SE4 as well, remembering there are a ton of nice roofs or ledges in the game you can snipe from. All said and done, I've mapped main campaign's collectibles.

Then I noticed in the SERVICE RECORD menu, COLLECTIBLES, there are 2 more maps I wasn't aware of (aside from the DLCs): Compound and Railyard. Well, recorded 2 videos explaining how I achieved what you'll find in the table, so I recommend you watch them. They may prove useful for other endeavors of yours you may want to achieve by the same or similar means.

Lastly, I will be updating this table once more with the means to remove restrictions from console commands and variables. Why? For 2 reasons: a) completion of anything possible I wanted to do in this game/engine; b) I can't seem to finish an Overwatch mission (Compound or Railyard) while being the sniper. Although I can teleport around and do the operative's part of the mission(s), I can't finish it as the sniper. This is why: 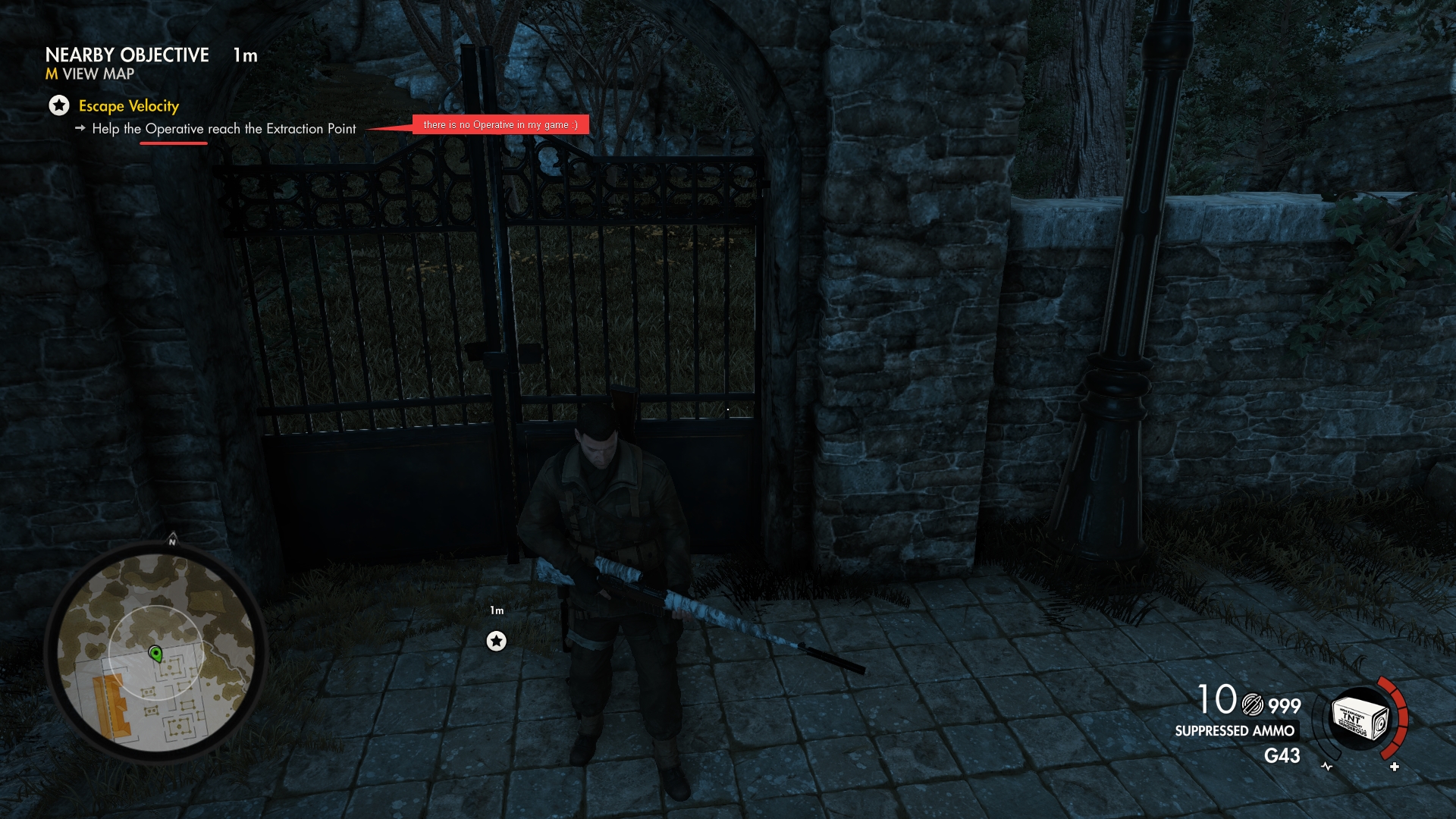 
And the description + notes for the options:
You may notice there's no God Mode option. You'll have to live without it, considering the amount of OTHER options this table has to offer. 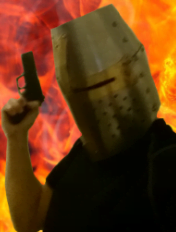 Alright, folks. So.. regarding this:

I'm playing the "Compound" mission, forced as Campaign mission, as the Sniper. I've finished all primary and secondary objectives, aside from that last one: 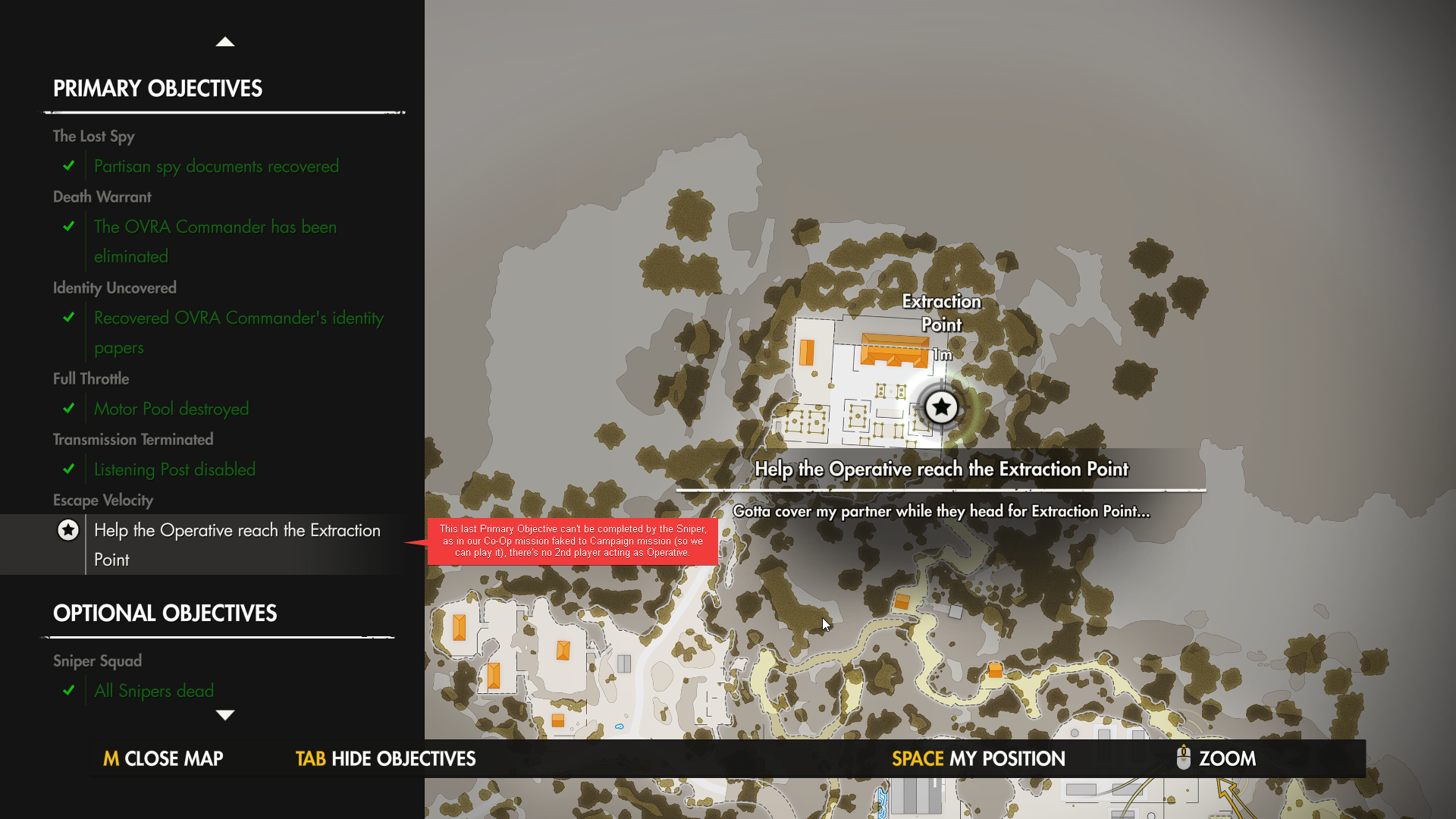 Without an existing Operative player in the map, the game mission can't be finished. So.. now that I have access to the console commands and variables I started doing some digging:
The conclusion.. in a bit. Still debugging and tracing to find the condition, LOL.

Alright. So I abandoned the idea of forcing Objectives to complete and found another way

Started from Frontend.Lobby.OverwatchRoleType console command. If you are the Sniper, then the value at this static address - SniperElite4_DX11.exe+BEC9E8 - is going to be 0. When you change to Operative, value becomes 1. Well.. in-mission.. this value is checked and game knows whether or not you're either type. Considering the end of the "Compound" mission is triggered only when the Operative escapes/exits, well.. if you play as the Sniper and have finished all objectives by the last one.. change value from 0 to 1 and the mission will end

Why we want this to properly end: a) so that you don't have to replay it as the Operative; b) so you can choose player models after first play-through.
Top 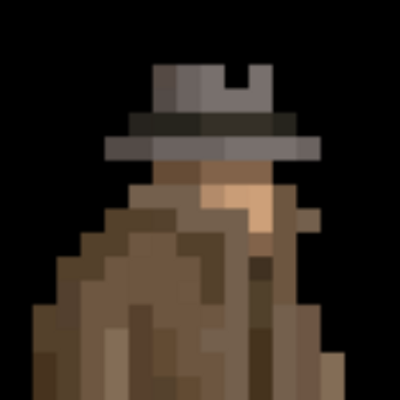 For someone who couldn't know less about coding, how would I go about changing the key for the scope teleport option in the script? It just looks like gobbledygook to me.
Top

VideoJones wrote: ↑
Thu May 07, 2020 4:30 pm
For someone who couldn't know less about coding, how would I go about changing the key for the scope teleport option in the script? It just looks like gobbledygook to me.

Change that 60 to the value of the key you want (it's specified under the key, prefixed with a '0x') listed in this table: [Link]

Click OK and save your table, so you don't have to do it every time you open the table.

Worked perfectly, thanks for the help.
Top

This does not seem to work for me -- the scripts to activate (the boxes check), but, neither the console commands, nor the "Overwatch" two-player bypass actually works. On the other hands, the "no recoil," "unlimited clip" [I]etc.[/I] do work... ?
Last edited by TroliusMaximus on Thu Jan 01, 1970 12:00 am, edited 1 time in total.
Top

Dear SunBeam: Hello
I really like the modifier you made,
SE4, will you still make new cheating projects? If you can. Can you consider making a double or triple troop dispatch, the original troop dispatch is too small.
Top

First off, thank you very much Sunbeam, for making this table. I have been using Cheat Engine for at least 10 years and have seen your (Sunbeam) scripts, tables and forum posts many, many times. You are very knowledgeable and helpful, kudos!!! Accessing the 2 maps Compound and Railyard to get the collectibles and play the maps in a single player environment is possible thanks to you. In the original post, you say: "Disable BPM Will keep this at 0. It will not increase as you perform any BPM action. You can modify the value in the script, in case you need certain amount for Upgrades unlocking (some weapons require you to shoot X enemies with BPM over 100 or some shit)." How exactly do you modify the script to make the BPM a value other than 0? (BPM over 100...) I tried changing some values where the script has: mov [rcx+58],(float)0.0 to mov [rcx+58],(float)100.0 and all other instances of ... (float)0.0 to ...(float)100.0 but this had no effect on changing the BPM. I have a little experience with LUA scripting / programming, but this is beyond my grasp. Any help (from anyone) would be greatly appreciated both in learning more about cheat engine script programming and in helping me achieve upgrading all the guns in the game.
Top

If nothing happens after you modify the script and re-enable it (I hope you've re-enabled it after modifying it), then the table may need to be updated. And at this point in time I only update my old tables just for Patreon patrons. See my signature below.
Top

The table works fine, I just need some help on what values to change within the script to set the BPM to over 100. I did save and reenable the script after modifying it. Some help on this would be greatly appreciated, you are a genius at cheat engine scripts / tables.
Top

^ I don't think you understood. If you changed something in the script as instructed, and it didn't work, then "the table works fine" isn't accurate. You'll have to manage on your own. I do appreciate the praise, though you're overdoing it. Peace out.
Top

You know what.. I'm sorry, but you want to be helped, yet there are comments in the script itself that tell you what you're looking at: 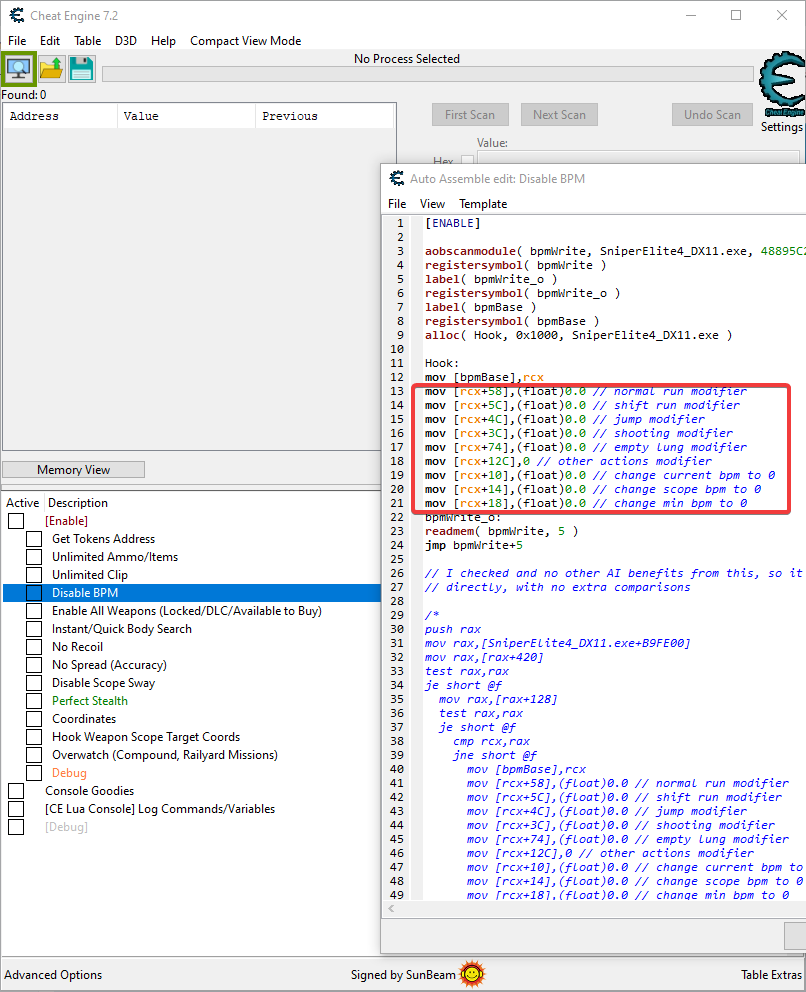 How to modify them? Disable the script first, OPEN THE SCRIPT (I hope you know how to do that...), edit the 0.0 to 101.0 where due, click OK. Re-enable the script. And don't forget to save the table, unless you want to do the process again the next time you try it. That's it.

Now.. if it doesn't work, then revert back to the post I wrote on the previous page where, due to game updates, the offsets between the brackets might've changed. In which case, the mov [],0.0 lines the script changes won't write to the proper offsets. If you need to know what an 'offset' is I suggest you start learning how to use CE, how to hack simple games, get accustomed to the terminology and so on.. and not "help me quick hack my game, so I'm happy".

P.S.: Back in the day, when internet wasn't available for everyone and we got shitty speeds (dial-up), we learned to understand things ourselves. And we did that trhough patience, a lot of testing, trial and error and perseverance. And always with a different target/game than the one we were aching to do some hack for. Today's generation just wants it handed on a silver platter, with minimal to 0 interest on how things work or learning to understand why some shit works like it does. Long story short: I'm not here to teach you the ropes; you learn them on your own, just like I did. On your own time, own sweat, own brain cells and pulled hair.
Top
Post Reply
18 posts