Post your topics and discussions here that you can't find a good section for.
Locked
3 posts • Page 1 of 1

Yeah you're wrong. You make accuse and then gaslight when I bring it up. No I'm playing Solo private because your console does not work online (Disbands Party and Prevents Party). You repeatedly make different accusation and then deny it. Why waste my time putting every quote in order when you repeatedly act ignorant each time I do then you make more different accusations... Grow up.


Jonaaa said he used console with friend, I asked how to use with my friend.

I asked how to do in private lobby with my friend as Jonaaa has.

You accuse me of four things I have never asked for. Ammo, Silencer, Mods and Levels.

This was said by Jonaaa and myself 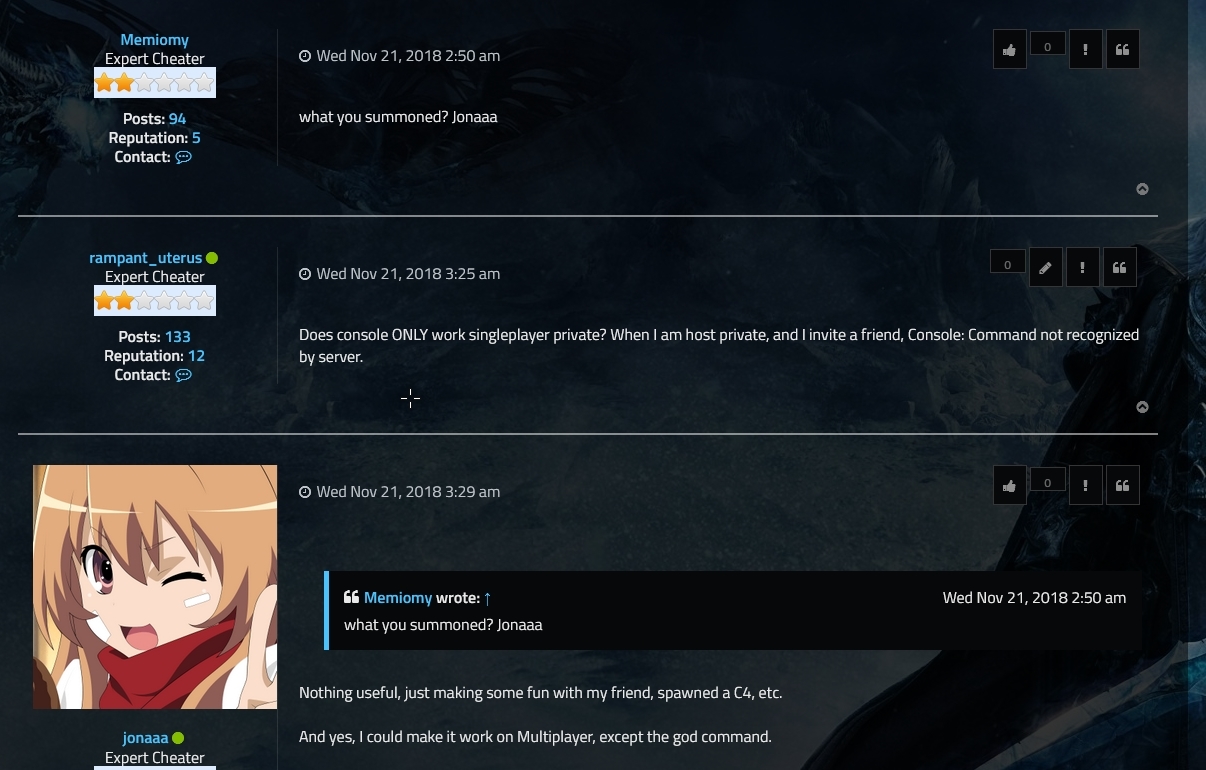 I said this because these things were "news" to me

You accuse me of saying my cheats were for online/offline. I never said what anything was for...

I stated my position because you accuse me without a basis...

Jonaaa says he is not interested in using console in Public Rooms. Neither am I and never said I was... Even stated I wasn't

I did not blame you or the forum for anything??!?!... You have "manifested" some false thinking towards myself and my posts. You mistake Glee and unprejudiced thinking with "IDGAF"

You say some complete bologna you make up about single player??? You made this up... Nowhere have I ever stated any reasoning.

Again you accuse me of intents that YOU have manifested/made up.

and again you accuse me of stuff you made up...

You have literally spent multiple posts fabricating a false argument based on your thoughts and was hostile to me for no reason other than your made up thoughts. You have not been nice and your entire attitude is mistaken. I have calmly and repeatedly stated my posts yet you continue to be hostile.

Yeah let's fabricate things against users, all users are simply here to enjoy Cheat Engine... How about all your posts related to pirated copies and making console usable for pirated copies? Or you making an excuse about Monster Hunter Online Table because Capcom doesn't have anti-cheat. Don't be a hypocrite. That china dude was right, you are very hostile. You fabricated "his reasoning" for posting here or why his code was the way it was (That's not up for you to decide, YOU DO NOT know why he made his table the way he did). Then you start lashing out at me over things YOU MADE UP. You are very hostile and in both circumstance YOU fabricated the reasoning for each situation. I don't care who did what why. You've been very rude and made false arguments where there was no reason to be any.

It's not just me either. Other's are being accused without reason too:

Re: Online console in OVERKILL's The Walking Dead

It's unfair to say he fabricated the chinese guy situation. He wasn't an administrator when that stuff was happening and from personal experience FRF has been used to steal content and profit off it, also advertise on it. I have allowed it but that doesn't make it right or that it is not happening.

Whenever there is an issue, i or Tim or another administrator gets PMed. I wasn't even aware of the ztsh situation until Sunbeam himself told me so that's not how someone innocent works. He removes his content then goes to 3dm and makes this hate post against the whole of FRF and brings race into it that we hate Chinese? Totally unfair. You don't involve the administration and then blame the administration for your own actions, like what? I wouldn't have known about it at all if it wasn't for sunbeam.

So yeah please don't use that. The way ztsh acted was completely douche like even if he was correct. He has even ignored my request to come here and end this. He's more than welcome still to post here, that was never an issue, idk why he made it.

Rest of the stuff is between you and Sunbeam and doesn't concern me/frf.
Please help fearlessrevolution
Top

Re: Online console in OVERKILL's The Walking Dead

@rampant_uterus: Let's take them one by one:

1) Our first interaction was when the zths argument started; you barged in and let the whole community know how cool you are by using tools from each and every table/trainer maker out there without caring who gets ripped off, who created the tool and how long it took to come up with it (self-implied; you don't need to use this yet again to say "I didn't say this" - no, you didn't; but with a smug attitude like "I use; give a shit" it's self-implied you don't care for what I just said).

2) Like I said, do a search for your inquiries; you will see what stands out the most: questions about spawning mods and weapons. Don't fucking make me query the whole DB for ALL your posts in other game topics.

3) I haven't fabricated shit; you fucks work on the premise you can twist words to your advantage and long posts would lose the reader in the process; but given the length of the post, one would be inclined to give you credit, right? "He surely must have a reason for having posted this much".

4) Did I say or not OTHERS besides you have asked for online shit (weapons, mods) and ANYTHING ELSE online related? You see my whole argument as an affront and using you as a scapegoat. The reason you see things like that is you're the only fucking one among all of the posters with a VOCAL attitude. If you want to be their lawyer and stand out in a crowd, don't fucking whine now it's become personal T_T

5) I've been at this since 2003. You have no fucking clue what it takes, how long it takes to get where I am now and so on.. so please spare me the tabloid bullshit of information you know so very little about. "Hey, I heard that.." - no, DO it yourself, not preach about things you don't fucking fiddle with. This forum isn't about LEGIT gaming. Do a quick search and you'll find a shitload of tables and tools for pirated games. What about MY posts?!? for pirated games? Yeah, what about them? T_T. What about the shit you posted for this one game involving paid content? Was it ESP, chams? EVERY fucking one out there knows these words - ESP, chams - are only pronounced when ONLINE FUCKING HACKING is involved. I don't give a shit you use it to wall hack and see loot boxes (ONCE MORE YOU PROVE FUCKING CRATES ARE YOUR INTEREST); it's tools created by people, tools you pay for, tools you use for the sole interest of getting COOL STUFF.

6) Here are the fucking forum rules: viewtopic.php?f=8&t=17 or here: xen/threads/forum-rules-read-me-first.20/. Now piss off.

Do write another wall of text, please, fucking ignoring everything I'm saying. Or don't. Either way, my job here's done.

Bottom line is you (and people like you) don't deserve to use anything I come up with, considering how you value this stuff; and that's the same reason skilled people don't want to share shit free of charge.
Top
Locked
3 posts • Page 1 of 1