Screenshot of the inventory screen, the first move in the first battle:
Show 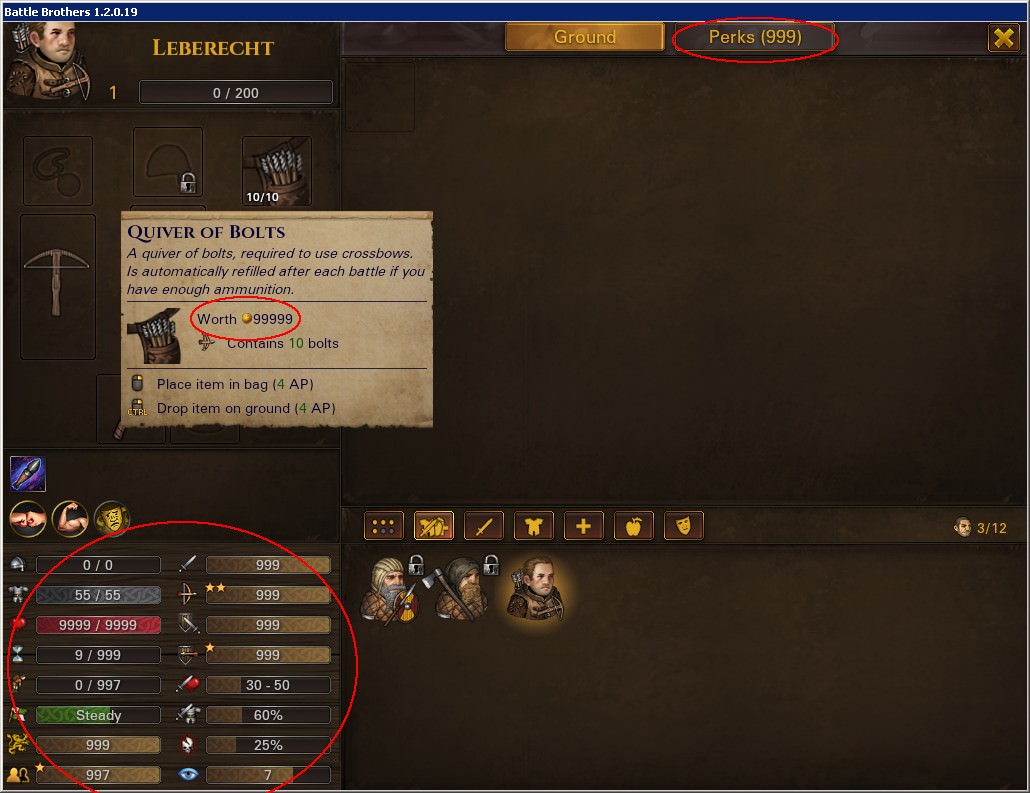 Changes.
- Script fixes.
- Added Teleport. The * key on the numeric keypad takes the squad to a point in the center of the screen.
- In "Stats" added "Vision".
- In "Stats" added "Fatigue+". This is the number by which the Fatigue value is reduced each turn in combat (the standard is 15).

Changes.
- the work of the Stats script has been changed, now the script works more stably on different systems.
- Added Food and Wage values. Food - the character's consumption of food per day, if = 0 for all, the food supply does not decrease. Wage - the basic value of wages per day.
- Added a large group of Extra. These are multipliers for different values (EXP, HP, AP, Damage, Wage and others). Important: all changes to the values that are contained in the Extra group are not saved by the game; when the game is restarted, they will be set to standard.

Try it.
This is a Stats script with a different filter.
Top

Try it.
This is a Stats script with a different filter.

Yes this one works Ty
Still can you make a map speed (or teleport) cheat?
Top

BB was a bit of a gripe for me, as i always had issues with doing exactly what i want via CE.
You might want to check this:
https://www.reddit.com/comments/a1yc2t

It's a save editor, just read the instructions and follow carefully.
As mentioned in other topic regarding BB - it's easier to edit save than memory in this game.
Top

Note. If you teleport away to another area of the map, the squad icon sometimes disappears. Click on the map so that the squad begins to move, then the icon will appear. Another way is to enable / disable CAMP.
Top

Note. If you teleport away to another area of the map, the squad icon sometimes disappears. Click on the map so that the squad begins to move, then the icon will appear. Another way is to enable / disable CAMP.

it does not activates unfortunately, but hey... Thank you for your hardworkingship.
Top

Is the script not activated or does teleportation not work?
Top

Check these scripts for the test. Turn on the time on the world map and try to activate "script test 1 AOB" and "script test 2 AOB". Did any work? If so, what does the line below the script show?
Top

You gonna make it

edit: don't know why i cant activate script 2 and the float value is irreguler number when moving.
edit2: i assume script 1 conrols horizontal soordinate wile scrit 2 is vertical.
edit 3: i made it work you need to chance the script 2 adree to bb211 and pointer to C
now we need working teleport
Top

Good. Try this teleport. All the same, the * button on the numeric keypad. It works?
Top
Post Reply
121 posts