Hello folks, just got this game installed. I'll post my research in this topic; feel free to join in.

First-up, the game's using an Engine I've not seen so far - Divinity Engine:

Health can be scanned for as a DWORD. It won't change as you alter it in Cheat Engine, which is probably why it throws most of you off when attempting it. Running a simple break and trace for it when walking over a surface filled with Caustic Brine triggers this chain: 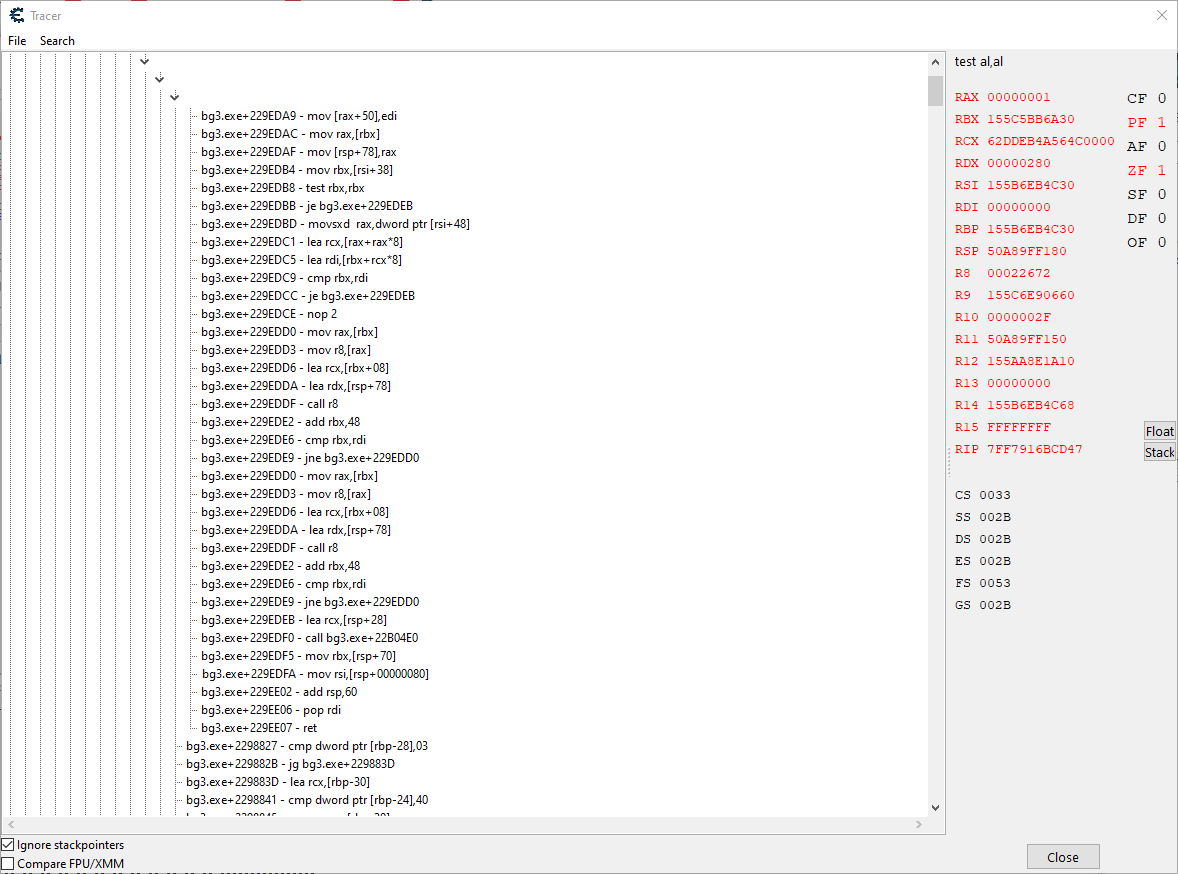 So I went all the way back to this spot:

As usual, trying to find as much as I can about pointers/structure and their dev-given names from context and/or member-functions. So I looked at that: 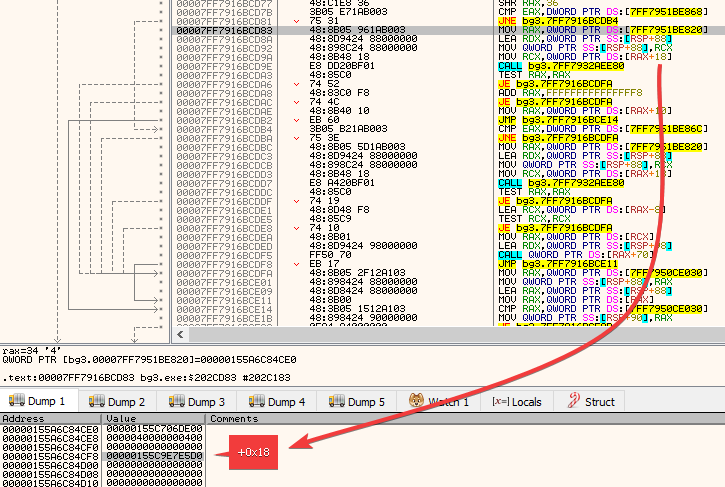 Then one more time:

Inside I saw this: 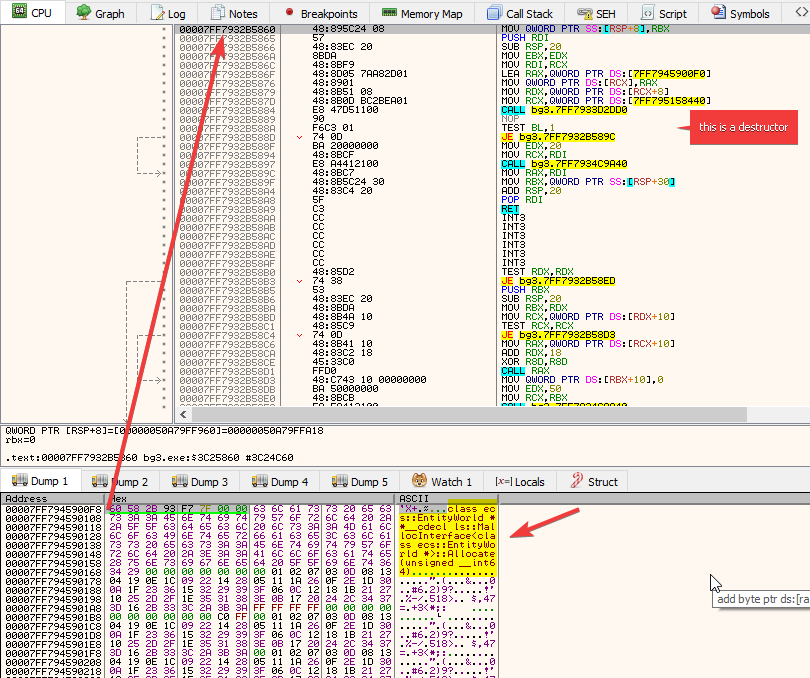 So I think it's safe to say that:

God Mode can be achieved by fiddling with this:

I got it by setting an exception breakpoint over the Health structure, of a considerable size, and watching what pops up as the Caustic Brine damages the Player. And this was the list:

Then I tried that CMP, setting the value to 0x1 and no more damage taken. You can still hear the yell though

Working on a Perfect God Mode and getting some structure names and relationships.

If you use this launch parameter...

You'll get gold.log and network.log in the game dir. Once you exit the game, they'll be populated. These logs will show you some semblance of a human readable stack for at least the client-server arch.

From there, you can find that bg3_dx11.exe+11AF420 is called by many ecl and esv class methods to log them. It also looks like that even when there's no log call, the FQN is still stored as a string in each method.

Also, for now, the reason why we should care about bg3_dx11.exe is simple: the Vulkan version is unstable and the developers recommend running the DX11 version, at least until the next hotfix.
Top

^ The LariLauncher automatically launches bg3.exe. I'm assuming you run the DX11 version by manually starting bg3_dx11.exe.. Else I don't see some switch, as the launcher has nothing in the settings.
Top

In the launcher, there's a gear icon next to the Play button. Click that for the dropdown. 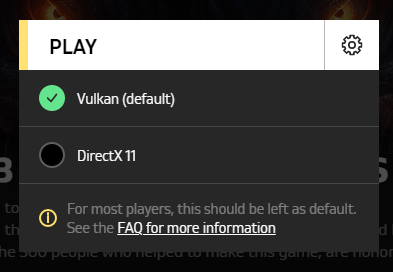 I was looking at the other gear, bottom-left.
Top

this seems awesome, i cant wait to see what you can do with making a trainer or a table with this, all this looks foreign to me i wish i understood this better. Thank you Sunbeam
Top

Hey Sunbeam, forgive my ignorance. But I was using CE earlier to try to test some stuff in the character creator. I think some of the stats are on 4 bytes. Anyway, I noticed that when using Vulkan, CE won't even work for me. I'm on the GOG Version. Does Vulkan stop CE from working properly?
Top

^ The first part of this topic was done using the Vulkan version. Scanning and debugging works fine, I found no issues. So no, I doubt CE has a problem with Vulkan.

Meanwhile, not much progress with structure names, but I'll keep at it. Found a lead on QWORD hashes and Class names. But, if you want a Perfect God Mode, here's the deal. I've redone the scan for HP, on DWORD. Found the address and ran a 'break and trace'. Left the branch here:

Then scrolled up to the prologue of the function. And put a RET there. I noticed that the game would still display what kind of damage is applied to you, but no amount, nor yelling from the character. So I'd say it's a good hook spot:

What to make of the location: 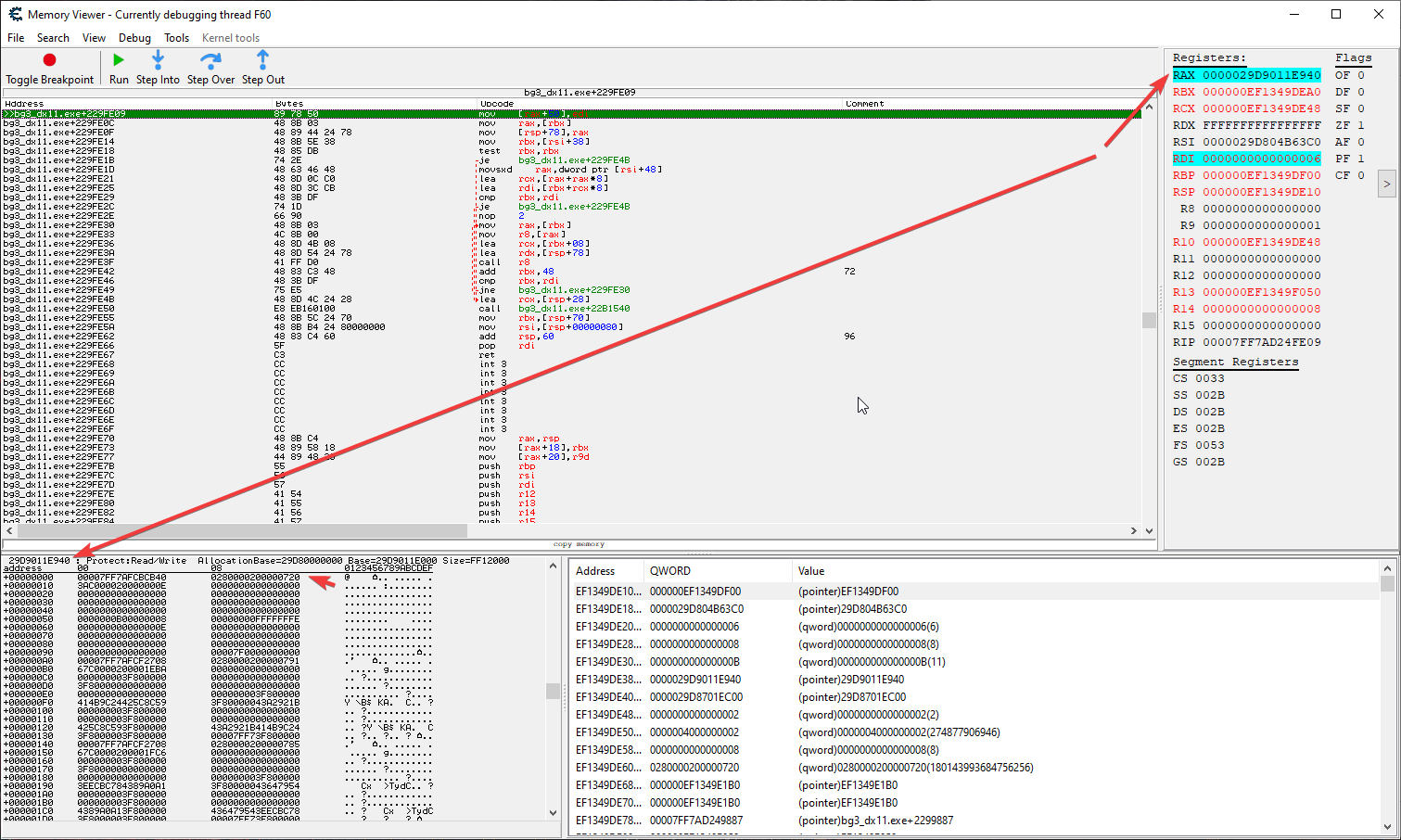 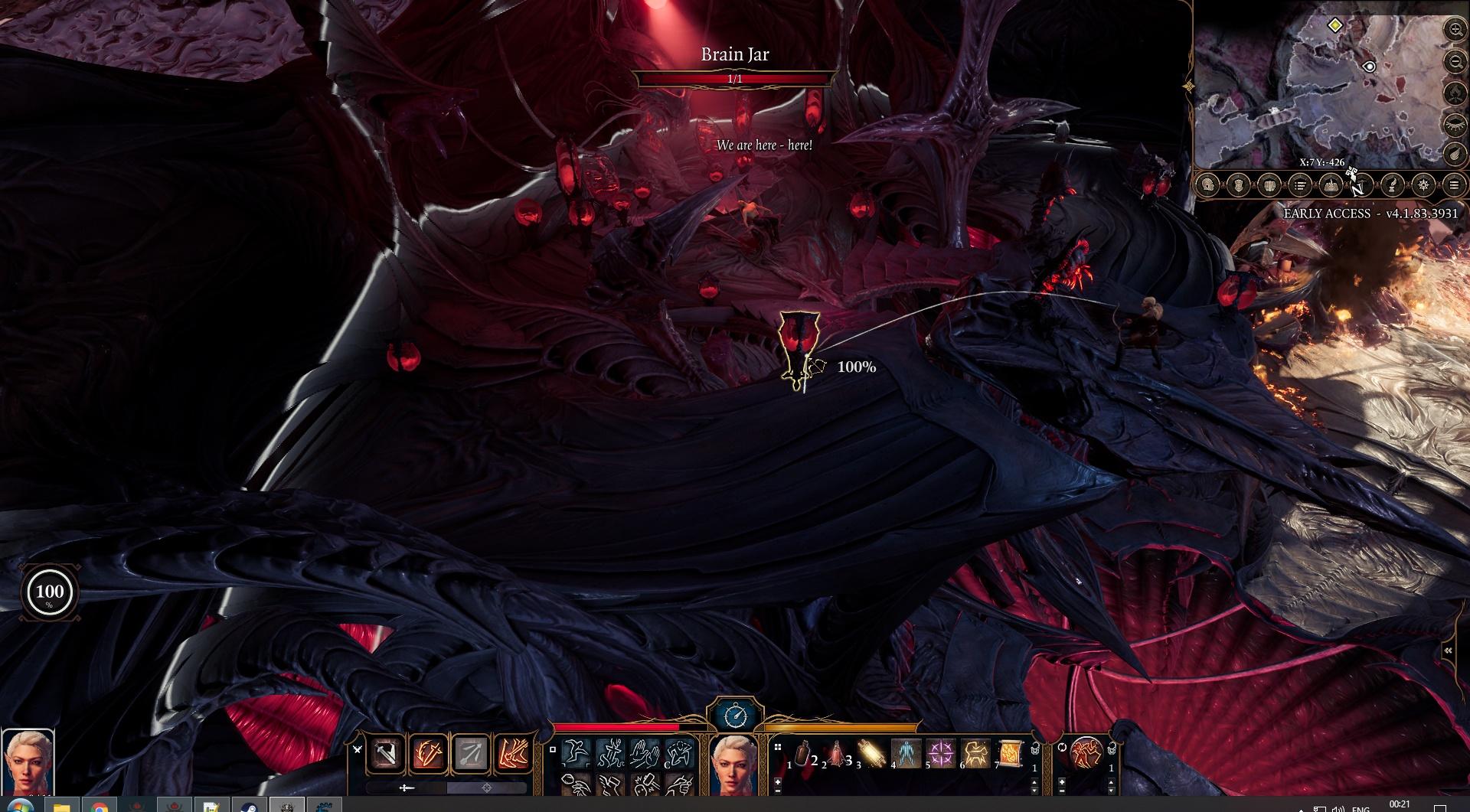 You can find statically stored UUIDs formatted as handles. These are just dashless UUIDs prefixed with an `h`. But that's probably not very useful. Osiris (the scripting language) provides a number of ways to check if a character is the player. For example, CharacterIsPlayer and IsPlayer. But any character in the game can be a player character; they just need the CHAR_PLAYER flag. There are also CHAR_PARTY, CHAR_DEAD, and CHAR_IMMORTAL flags.
Top

^ Yeah, found that EntityWorld pointer is used to retrieve various PlayerUUID-typed structures, based on a hardcoded DWORD. These are typically stored in static addresses.

Inside that CALL though, you will find this:

Then there are CALLs that land on structurally-similar functions (a wrapper is ran first, then the core function), like so:

Notice how the static address here is different.

So if you find all such functions.. feeding an RCX buffer made up of 2 QWORDs, first being the EntityWorld pointer, next being PlayerUUID, you get various Player-related structures

We just need to find a few more bearings to properly understand WTF is going on here.
Top

Apparently for DoS2 Larian had a remote console for the editor called ReCon [1]. I would not be shocked if that is how they do debug with the game as well though they say this tool is not mean for the game. Hope for ingame console might go down alittle but then again the fact that WidgetToggleDebugConsole and UseInGameConsole exist may mean there is in game console we can enable.


Edit: Sort of looks like the game uses temporary memory/workspaces a lot probably for multithreading and multiplayer. That makes some things harder to locate if true. Also it seems like a lot of the UI behaves strangely when underlying data changes meaning that enable/visible flags are only updated on change and does not reevaluate underlying state a lot.

I changed my HP and UI do not reflect the new value until healed or damaged again but it used the correct value. Even UI was showing different value after opening screens so not clear what I was seeing.

I think I did have a calls stack with memcpy or something reading the HP value lending further evidence that they maybe doing copies but perhaps that was a "realloc" operation.
Top

I've managed to find my way through it

Find all references to 0x7FF7B0B0A2F4 and you'll get a shitload of results:

All those LEAs will point to instances of functions having the same structure. Scroll to the bottom to find all the instructions using the value stored at 0x7FF7B0B0A2F4: 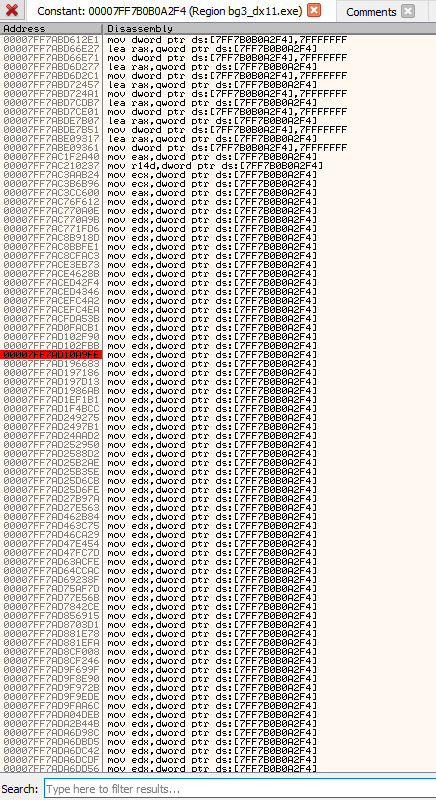 Now.. if you go to any of the top LEAs, you will see this:

We're looking at one of the initializers for "struct eoc::HealthComponent>(void)"

So.. 0xEB (stored in 0x7FF7B0B0A2F4) is the identifier for exactly what the string says. Wanna find out where the HealthComponent is being acquired with the help of that DWORD value? Set breakpoints on all non-LEA instructions in your references list and start testing

Using the above logic, I found these spots that should come in handy:

Set a break at the above, then hold Ctrl and target an object; preferably one that doesn't have infinite HP.

The next piece of code will get the HealthComponent of anything you hover the mouse over: 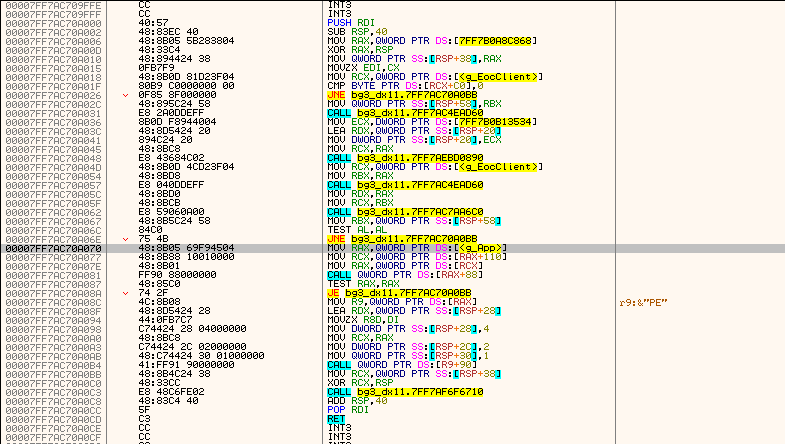 Another example of Components:

All of the above are read in one single function