Add topics here with methods, analysis, code snippets, mods etc. for a certain game that normally won't make it in the Tables or Requests sections.
Post Reply
11 posts • Page 1 of 1

Hello folks. Yet another new game with a different engine. This time around: Foundation Engine.

I'll be posting my discoveries in this topic, as I progress. Should help those of you who actively work on the game, while for others it may prove a decent read.. or an annoying mouse scroll of walls of text

Whichever your reaction, both I will enjoy

What I first like to do is find a means to get to the version of the game. That helps me use the formatted way in which developers store this internally, somewhere in the .exe, or just computed in some structure that gets initialized at game start. And I got this:

The memory data of what's being read looks like this:

So 0x10 holds the p->str (I'll mark like this a pointer-to-string) to the game's name: "Marvel's Avengers".

Engine loads up the offset to p->str for Version. Then checks if a certain flag 0x18 away from that address (rcx+0x238) holds a value that should be > 0x10. In our case, the value is 0x1F. Not sure exactly at this point in time what it stands for, but maybe I'll find out later. So the function overall retrieves the p->str to Version, on the condition the flag it checks is > 0x10. I called it GetVersion.

So you'll see me use this method to get the game's version compared to the version for which my table is created. If the 2 versions match, then the table will just enable main script. If they don't match, you'll see a warning and some comments. Just like I did in the table for Serious Sam 4: 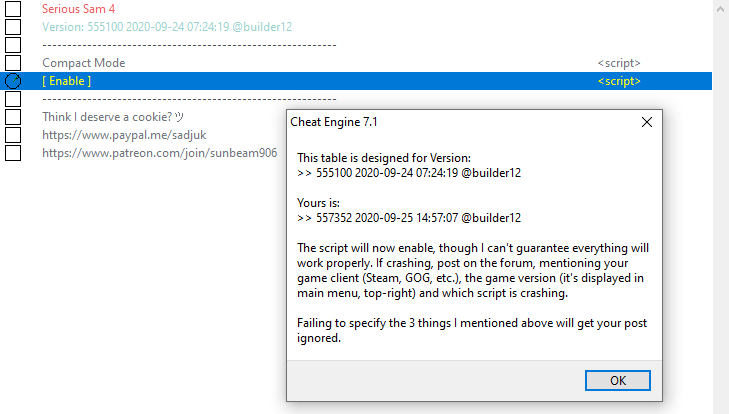 As far as the names of the structures, who they are and what they do.. If you can't use RTTI ([Link]) to get the information you need, I usually look at the member-functions (or virtual table; short, vtable) for "bread-crumbs"

And in this case, looking at that "pBase" pointer's member-functions I found several things.

Most standard Engine types will have the first member-function a destructor. The rest of them will do other things. Among them I usually look for either a "GetClass" (name) function or leads to a name in any function. The list I got for that 'pBase' is shown below:

So I started checking out each of those functions and found this in function at 0x10 in the list above:

See that "NxApp"? Welp, I continued looking at the rest of the functions and saw this in the function at 0x20:

Again, "NxApp". Checked another one, the function at 0x28:

Again "NxApp". Then the function at 0xD8 offset:

So I guess it's safe to say our 'pBase' is actually "NxApp" or Application. So the function @ 14107EEB0 can be called GetApplication. That's how I do it. And now you know (since I've been asked about this several times).

I've managed to figure out how to obtain Perfect God Mode (no staggering; enemies just hit through you).

As a starting point you have 2 options: a) normal scan for unknown/changed/unchanged till you find the address (that's if you start hacking the game from scratch); b) make use of already existing progress and continue on your path.

Today I'm gonna show you how to actually make use of someone's work to achieve more progress or improved results. Just in case you wondered "how" this is done. Keep in mind the starting point here is obtaining a lead to the HP structure and not impersonating or claiming someone else's full work on the game. That being said, I'll be using this table (credits fly out to ArmY of 0n3).

Note that the table is quite outdated, 22nd of August 2020, made for the Beta v1.0 build 26.1. Even so, I could use the Inf.Health script, but didn't quite like the outcome. Your health bar would drop for a split second then stay frozen, but you do get hit and the blood effect filling the HUD plus push-back on each interaction is very annoying. Not to mention the constant screaming and yelling as you take hits..

So.. the aob ArmY used is still working:

So what we want from this spot is determining who is R8. Our starting pointer (I'm not going to call it "base") for HP.

What I did next was to add to the address appointed by r8+48C to CE's list and check out the value. I noticed it's a DWORD. Then I looked at [r8+488] and noticed it's a FLOAT. Same value as the 0x48C DWORD, but of FLOAT type.

What I wanted to see next is WHO writes to it when you get hit. So I've set a breakpoint on either of them and got into a fight. And got these addresses popping up:

Then I wanted to know EXACTLY which of the 3 above, if NOP-ed, would not write to my HP. So I went to the prologue of each of the 3 0x48C functions and put a RET there, testing each of them. I found the last one to be the culprit:

The prologue of the function:

Now.. this spot you'll find it's shared. So not only do we need to figure out what the pointer to HP stands for, but also a way to filter this stuff. The first thing I wanted to do was to backtrace as far as possible, till RET-ing function prologues would disable getting hit. To do that, I went to the epilogue of the above function:

Right-clicked the RET, choose "Break and trace instructions" then tick the below: 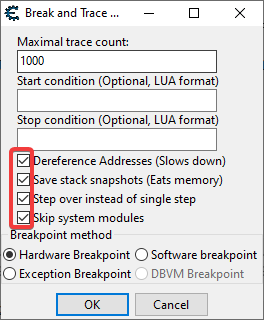 Once you get hit, game will freeze for a few seconds then resume. Back out in CE you will see this: 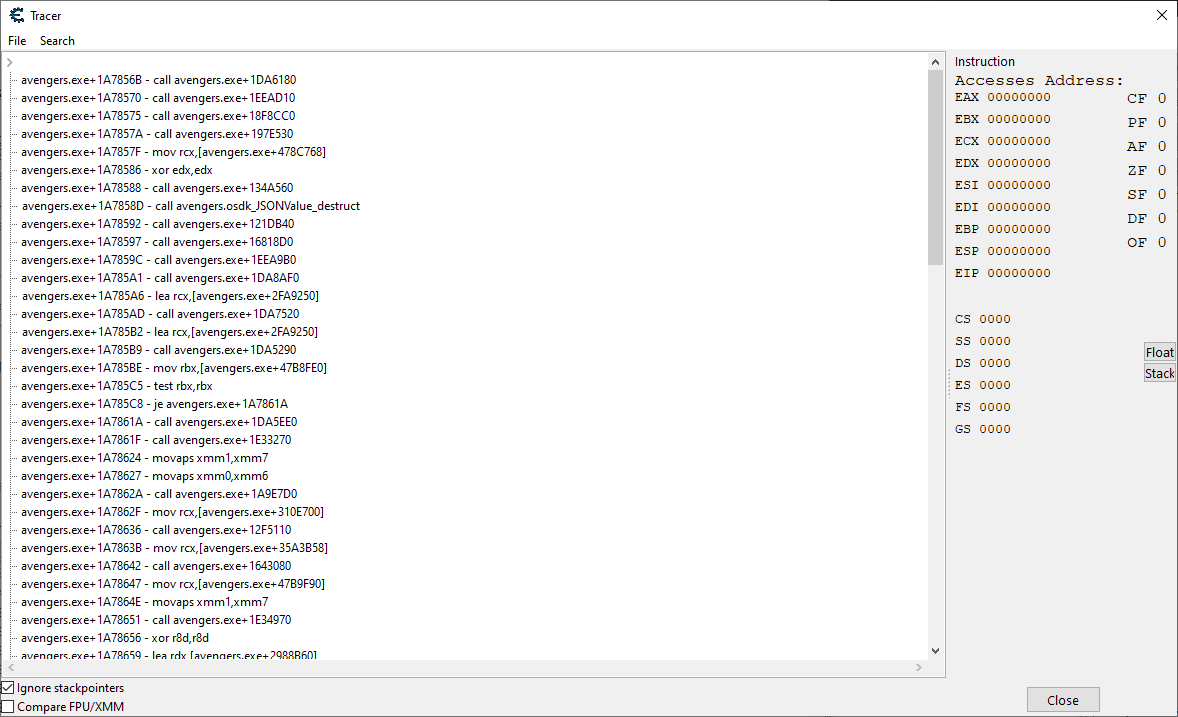 Then right-click top node and choose "Expand all" and this is what you'll see: 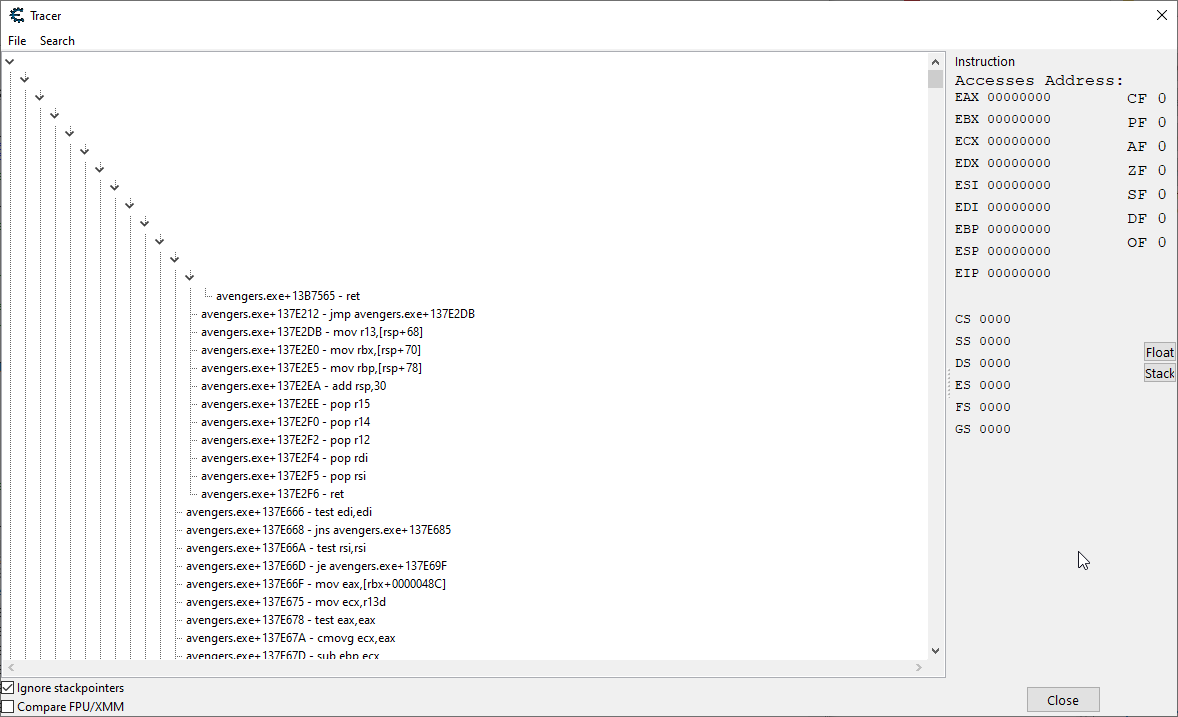 So this is where I stopped and considered this to be a nice Perfect God Mode spot, on the condition I manage to filter out the player. Remember everything in the chain is shared.

And this is where the confusing part starts, as most of you will be like WTF is up. So was I, but pulled it through eventually. Problem is this is tricky to explain, as I too don't understand it perfectly.

We want to snoop around the RCX pointer, which is usually the first thing you should look at in x64 ASM when dealing with functions and prologues. In my case, it looked like this, while getting hit by a robot: 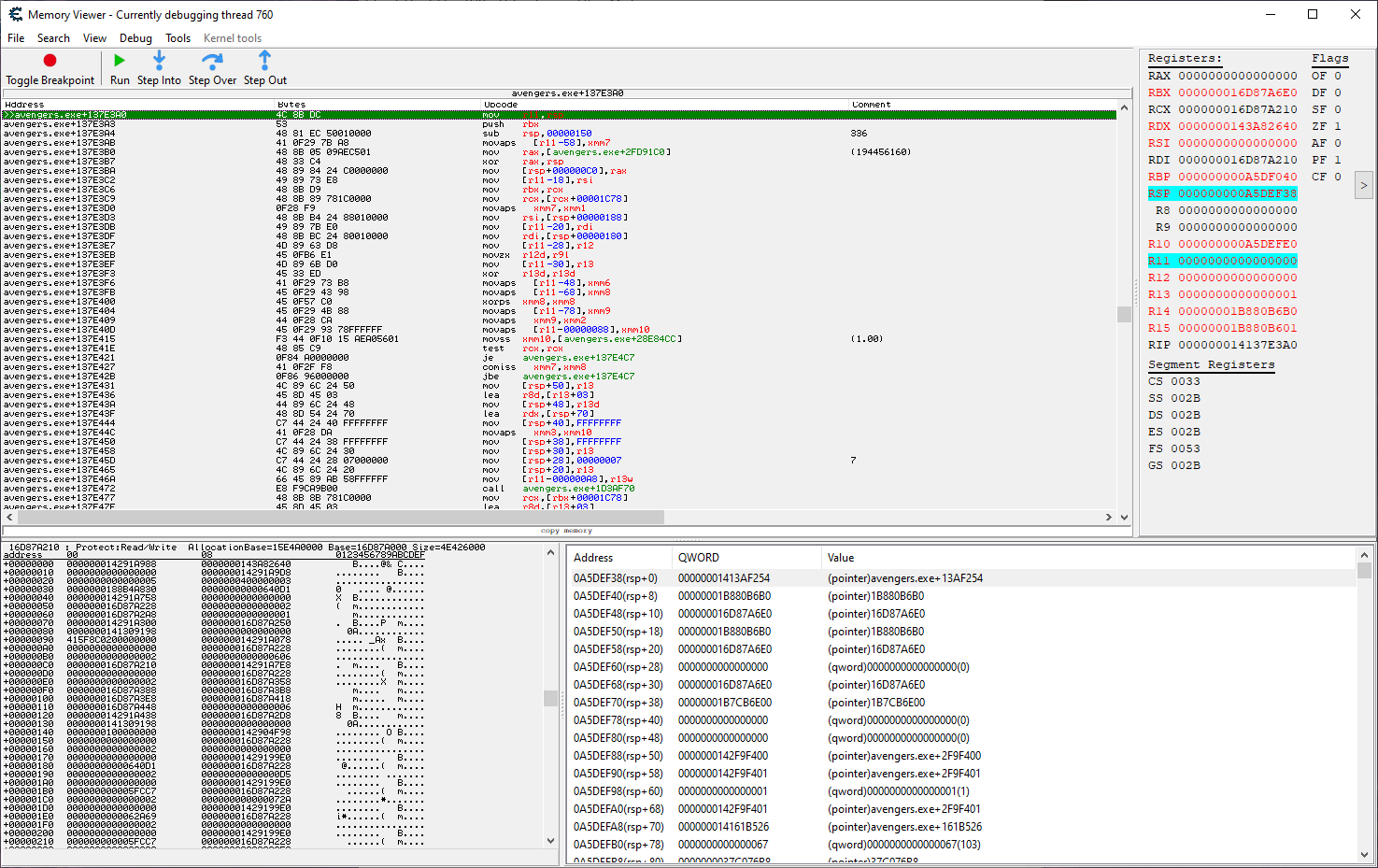 So I started looking at the member-functions table from RCX. To get there, just browse in memory the x64 pointer at 0x00 offset in your RCX's memory space. I used x64dbg for this, as it better displays the content: 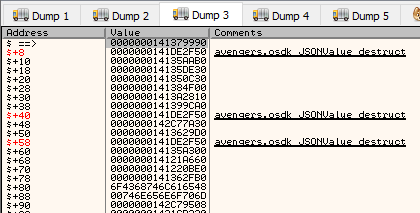 I checked each of the functions to make sense what we're dealing with here. And got this by looking at the function at 0x28 offset: 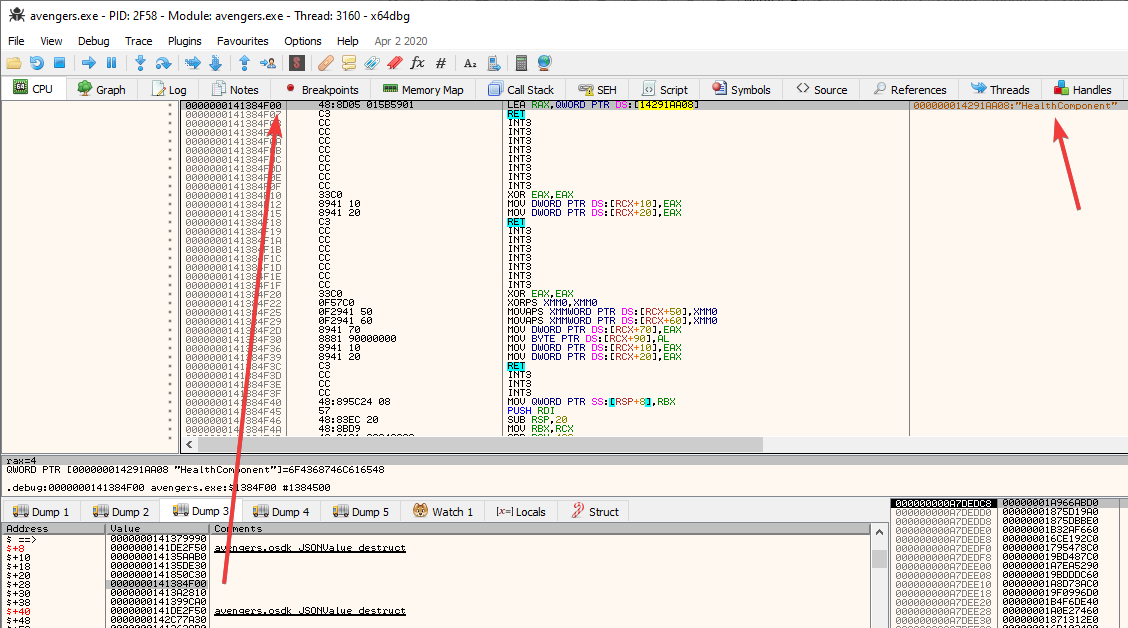 So what's being processed here is our HealthComponent

Alright, one down, we know what's this RCX we're looking at. OK, now.. how to filter this out of the various being processed by this function? You have several options:

The latter one would be a lot simpler, though I prefer challenges. So I went with option a). And found this logic:

From what I could gather in the above.. 0x19 is the offset for the HealthComponent structure in the player's Components table. To get to that table, you'd check offset 0xF0. Apparently, this offset can't be above a fixed value stored at 0xE8 offset. Confusing, right? Especially since you're probably used with simple ASM operations and nothing like the above..

I've then managed to find a static location where I'd read a pointer, which, at 0x8 would contain the Components table. I'm sure it's related to our Player because the computations lead exactly to OUR HealthComponent: 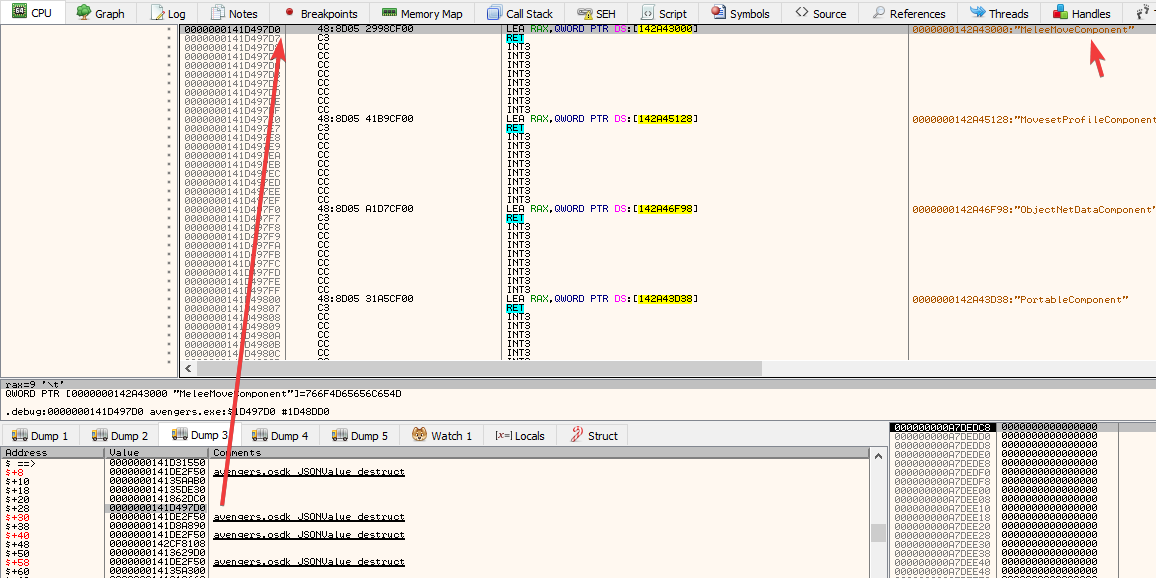 Now.. piecing it all together, we get this:

Then from here, we have this calculus that we need to do:

What the script does:

- hooks the spot I've found out to work fine skipping damage processing (avengers.exe+137E3A0 - 4C 8B DC - mov r11,rsp)
- filters the Player's HealthComponent out of the many being processed by that function
- if our Player HealthComponent, function exits (you see the "ret")

Give it a go

Nice!! Would you think it’s possible to create a character/mesh swap with CE for this game? (Similar to what we have with Red Dead 2 and GTA through scripthook)?
Top

^ I have no interest for such things. Me | | character swapping, free camera, cinematic tools, skins, mods, "change player with another" and any other personal requests people have. The "| |" means I don't intersect with any of those

Hmm user error. After I put the script in it doesn't activate. When I right click it above where it says Delete this record it says

<<Error while scanning for AOB's : ProcessDamage Error: Not all results found>>
Top

<<Error while scanning for AOB's : ProcessDamage Error: Not all results found>>

Go to "avengers.exe+137E3A0" address in Memory View (copy what's between the "", CE, Memory View, click in top window, Ctrl+G, paste, Enter) and post a screenshot of what you see there. I believe you're not running the latest Steam version 1.3 build 13.18.
Top

Here is the screenshot

Okay I got it to work. It was either the verifying the game files I did or downloading the High Res Texture pack that did it. Not sure which but after doing those two things I did the memory search again and it found something it didn't bring up the Nothing Found box so I tried the script and it worked.
Top

BEWARE THAT PERFECT GOD MAY BREAK SCRIPTED EVENTS AND YOUR SAVE GAME IS GOING TO BE BRICKED.

What I mean with the above. The function hooked to filter out the Player's HealthComponent is also executed when a map is initialized. I found at least 2 places where, when you were done defeating all AI, nothing would happen. No cutscene, no nada: a) "Banner's Descent", right after fighting the first set of mobs outside the main lab entrance; b) "House Call" mission wouldn't end after defeating all robots outside with Tony, Hulk and Kamala.

Side-effects (what I mean with "bricked"): "Reload from Checkpoint" won't work properly, you won't be able to exit the campaign mission or restart it (I really applaud the developers for this stupid idea of not providing means to restart a map.. stupid, stupid, stupid!), NPCs being generated under the map (e.g.: pressing V would show Hulk sinking under the map, distance between him and you increasing rapidly, as he goes down). Tarleton's ship would freeze in place and the trailer cutscene wouldn't play. This scene @ 16:50:

So please back-up your shit before you use this God Mode. I will provide some alternative, we'll see.

Save folder is here:

There is a backup save generated even 5 minutes I think in the settings gameplay menu. But also do backup manually. This is one of the few games I've played that has had more issues of deleting your stuff than others in recent memory.
Top
Post Reply
11 posts • Page 1 of 1