Made this table for learning purpose and to ease the making of cheat table for UE4 Win64 based game... First of all, this is nicelly done, and it could convert into a full sdk generator. So thank you for your effort, and i hope to see more from this.

Second, those structs are hand made and saved on the ctable "Win64-Shipping.CT", or are you generating them on the fly?
Top

Unreal Engine Algorithm version
Made this because I can't find a dumper that can dump the game I'm playing...

Pros
- Stable & doesn't crash much & compatible with many games...

Update 1
- Fixed a typo that made the script unable to dump property for >=25 version
- Fixed StaticFindObjectAlgo script to find object more accurately...
Sorry, for the inconvenience...

Update 3.9
- Optimized script to be a bit faster & fixed other issues...

Update 4
- Added structureDissectCallback - so, just like mono/.net when this script is activated , it will automatically fill structure dissect with symbols if it's a valid Instance address..
- Object Dumper will now dump Enum's value & StructPropery/ObjectProperty will have ~ toward its ScriptStruct

Nice Tool. It already helped me a lot. Keep the good work!
Top

This seems very interesting, but I don't know how to use it or what games to use it on. Could someone post an example? Something like "I hook into Batman: Arkham Asylum (which is a UE4 game I think), expand the 'UE4 entry, and click on 'Basic UE Object dumper'. Then I see there's a class called 'Script/Batmobile' and I click on X and do Y and now it's invulnerable." Or not even a full cheat, but how this would be used to dissect a structure you found a pointer to some other way. Can it tell what type you are pointing to and provide the structure? Do you just have to click those two things for that to happen automatically, or do you have to do something else?

Basic:
If you know OOP you should be able to understand this... Interesting variables will most likely be inside PlayerController.Character/.Pawn or GameInstance depending on what you want & where dev put that stuff...

depth is how far you want the struct to be which is 0 if you dont want to include parent/super class's member or vice versa...

When struct had been created, you can use its symbol...

Pros
- Stable & doesn't crash much & compatible with many games...

Update 1
- Fixed a typo that made the script unable to dump property for >=25 version
- Fixed StaticFindObjectAlgo script to find object more accurately...
Sorry, for the inconvenience...

So im in a game where the referenced strings say UnrealEngine_4_10_4. The main script wouldn't activate first saying the AOB for GUObjectArray wasn't found, then the AOB for GEngine wasn't found. I put the correct AOBs here:

When attempting to activate the main script after that I get a Range Check Error. Can you help? Thanks!
Top

Just some quick questions, sorry to bother:
NICE! So I am just learning this stuff but I found out the main character stuff is in:
00000168A62E9D80 Class /Script/PumpkinOnline.Main_Character_PC ~ Class /Script/Engine.PlayerController

So i created a structure with the lua function you showed with 168A62E9D80 and there it was! Amazing!
Question1:
Now in this case what would be like the pointer to this if I wanted to create some pointers in the table using the names to get to it (Like you have).

here are the things at the top of the uobject dump:

and so looking here at the /PumpkinOnline.Main_Character_PC structure:

lets say I wanted to create a structure with the names populated for InventoryObjects (in tha pic). In the dump it shows:
00000168B6925D00 ArrayProperty /Script/PumpkinOnline.Main_Character_PC:InventoryObjects

And what would THAT pointer look like if I wanted to add it to the table? Thanks, this would help me learn a lot!
Top

Since it's an ArrayProperty , you need to find ScriptStruct for that Property, in your case might be ScriptStruct /Script/PumpkinOnline.InventoryItem ?
Top

So I see this:

So what would the pointer look like? I guess Im having trouble understanding where it would go here and what it would be called, how it would look: 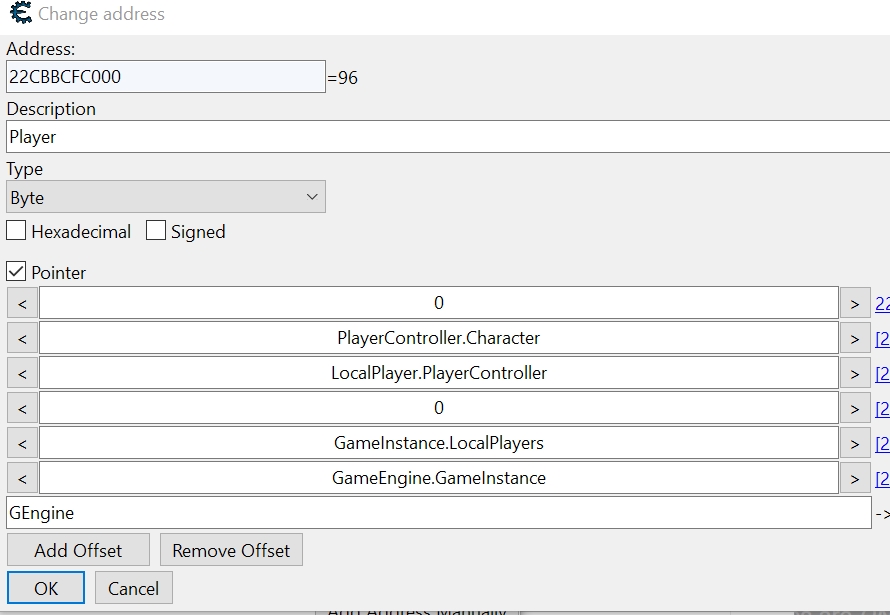 How can I tell where the stuff goes?

Also curious:
IF I don't have the actual address to put into that structure, it won't work. Lets say I generated the structure, and wanted to find out the address I needed to put into it and I just had this (without your pointers): [00004992] 0000022C230F0C80 <<--what would I need to do with it to find the address I need to put into the structure after I generated it? IS it all so nested that my pointer would look like the pic above? Everything comes from gEngine?

I can't help much on forum , because it keep disconnecting...

Hi, thanks but I get an error at line 1 attempt to perfom nil value for line 13.
Does it help that I created my player controller like this:

which allowed me to see pawn and the inventory pointers..
Top

Aren't you a Table Maker... You're supposed to edit the script according to your needs & circumstances...