Hello everyone, i'm searching someone that can help me with a problem i've encountered so far:

I'm relatively new to assembly and cheat engine and i'm doing this for learning and make this old game more fun.
So basically i want to replicate some "Gamemodes" that newer worms game have to this old game by making a cheat table, stuff like DoubleDamage, random weapon for every turn by setting to 0 ammo to every weapon except to a random one.

The problem I've encountered is about the double damage, I can't identify in the game where the damage get's calculated, by far the things i've discovered are:

The game runs over DosBOX 0.74 which's Virtual Memory base address is at 0x01D3A1A0
Then with some searches i figured out the addresses for every worm HP bar in the game, the game store the value as a byte value (Max 255)
With the addressess and HexCalc i got the offsets so that i don't have to find them every single time I open the game.
When everything was set up, I went to a worm hpbar address to check what code writes on that address (Find out what instructions writes on this address)
Now the problem is, there's no sub code here, i mean i supposed that damage was calculated by a subtraction, instead there is a mov, so i guessed that simply the game ovverride the old life value with a new life value by that mov code, exactly it goes like this: 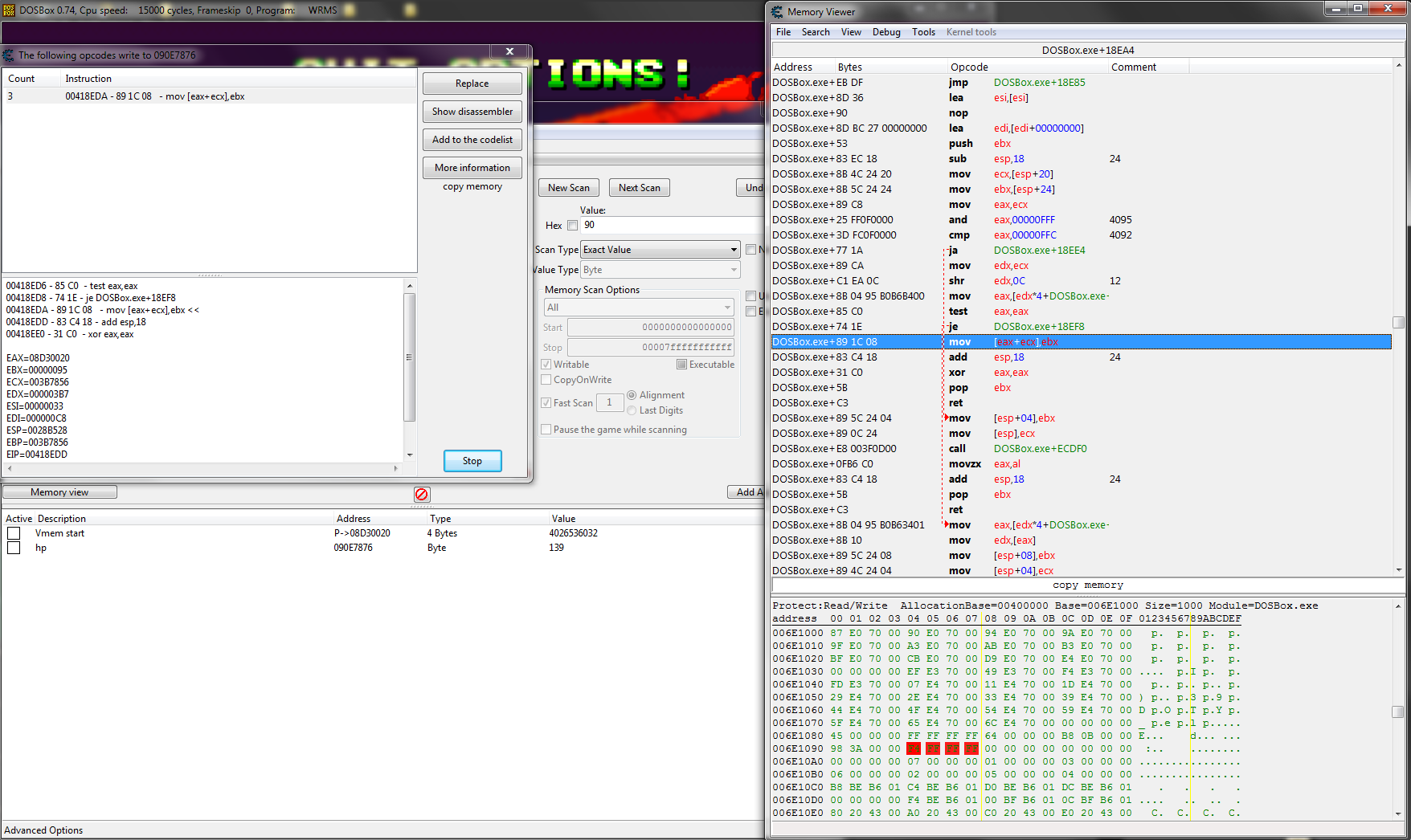 mov [eax+ecx],ebx
I confirmed my guess because cheking eax+ecx result them in being EAX the base vmem address, and ecx the offset to that worm hpbar.
No matter which worm it is always this one function that changes their life.
Now the problem is i would like to change the value of the damage dealt to the worm, but I can't find neither the value itself by normally searching for it, neither find some clue in the code where this happens, theorically in EBX there should be stored the new life value (Old life - damage taken), but there is no sub whatsoever the code near that line.
I've tried changing the ebx register manually for example : Mov [eax+ecx],50 because i thought that insteand of use the new value it would simply set the worm life to 50 but it just crashes immediatly after.
Also i figured out that in the ESI is registered the damage value for the turn, in this case is 33 (51), the turn after i dealt 15 dmg and it was F so it should be correct, so i tried to change the ESI value but nothing happens at all...

Hope someone can help me, thanks everyone for any reply!

It's at a stack address esp+24, you'll need to understand a bit more about ASM and memory, plus how the stack works. But ultimately you'll want to see where it writes to the address of esp+24. But you might need to find where this is called from or it might be just above the code your looking at.
P

Ok, At least I have some clues now, I know how stack works but maybe not enough ahahah, so i'm trying to backtrace where it writes on that esp+24, without much of results, if i try to break and trace that function i just get endless results and it's hard to get something
Above the code i've sent in the screen there is nothing about it, and also i tried to NOP it just for the sake of kinda: "Nullifying it to get 0 damage" but it crashes the game.
Not gonna give up on this, thanks for the reply!

I'd break and trace the instruction, just use a start condition with the actual address of the HP and set it up to step over calls. Then this will help you find where it's being called.

Here's a video that goes over it; it's a bit outdated, but you should be able to figure it out.
[video]https://youtu.be/KlvW4CuEqCg[/video]
P

Ok i'm back after some more tests ahah, i couldn't manage to find properly where the stack pointer is called but i've discovered the reason why i can't touch anything about the code without making it crash, my guess it's due to the game being emulated, that causes the instruction I try to override to be used for multiple addresses ence making the software crash as soon as i execute the changes.
So i thought that i can try to make an If statement in assembly that goes: "Do this ONLY if the address stored in eax+ecx is the one of the health value" and with that it "works"the game doesn't crash anymore and also checking the adress with "Check what writes to this address" result in a new function being recognized when the script is active, yet i tried with something stupid like: mov [eax+ecx],1 and despite not crashing, it still didn't set my hp to 1, i've also tried 0x1 as value to put in it but nothing...

EDIT: I finally managed to get it to work, the problem was at the CMP function, i compared what is IN eax+ecx due to the [] (So it was my health value) instead of comparing their addresses combined, for now i've fixed this by comparing ecx (that contain the offset to the worm hp from the emulator vmem base address) and to negate all damage to one specific worm by this code and i think i can probably manage to turn this around from here on, i hope!

For the compare, you can use LEA (load effective address, I think):

Ohh thanks for the tip!, I'll try everything in the next days, and share the results here.
P

Ok, I tried the way you suggested, it works perfectly but i had to change everything for the what i had in mind originally:
I want to make a double damage gamemode, the script i've originally created and yours checked for 1 particular hp address, so it worked but only for that 1 worm out of the possibly 16 in the game,

So i've adjusted it for 4 worms currently as this:

Code:
Sooo it probably is not efficent but it works and it's the best solution i came up with my knowledge and now i can move one to the random weapon thingy.
Thanks for all the help!
You must log in or register to reply here.
Top