Any chance for a Field Of View toggle here ? The game's fov is horrible :/

Any chance for a Field Of View toggle here ? The game's fov is horrible :/
Click to expand...

People read this forum on mobile, how about you either stop quoting lengthy posts or snip them like i did for you?

Update main post with some more goodies; this time around I'll let you run some APEX commands from CE
K

Thanks for the update. Loving the 'real' godmode as seriously, NO trainer or table or anything out there by anyone at all has managed to get god mode right.

KS212 said:
Thanks for the update. Loving the 'real' godmode as seriously, NO trainer or table or anything out there by anyone at all has managed to get god mode right.
Click to expand...

My trainer has for fearlessrevolution.

Any way to have a increased multiplier for chaos, to get squads quickly.
J

Dumping the strings (The Strings2.exe program and running that on JC4.exe simply enough, lots of junk to sift through however.) and using "chaos" as a searchword gives a few hits but nothing that seems to outright allow for changing the multiplier or alter the existing value.

To group everything around these commands together.

Ply I assume simply means player, Ev would likely be Environment and Stat probably is statistics or status.

Been looking around for FOV but I don't think that's exposed as a regular console command, haven't dug into too much in the actual console commands either and as the initial post shows many commands also don't have any apparent effect whatsoever.

EDIT: And metrics. but that doesn't seem terribly useful either.


EDIT: Yeah those seem to be everything for retooler. , ev. and stat. and thus so far ply. has the most interesting and useful commands from how it looks like.


EDIT: Hmm with everything using dots that might be one way to go through the different groups.

But then again many of these might not really be that useful or even do anything at all particularly in the release version of the game if they were mainly for debugging or similar.


And some of these are probably more like scripts than anything else just having a similar form to the cvars.

network.connection.changed
(More scripting probably, have to go through these at some point see if anything here does anything expecting a NO from most of it.)

EDIT: Here's something about abilities.

That's just scripts I guess for the in-vehicle radio stations.

EDIT: There, add a spoiler tag to shorten the post down from all the copy/paste cvars and/or scripts.

These might be something of use, the rest well probably not so much.

Sorry to burst your bubble, but the function I'm calling doesn't take into account anything but these:

It's not the main command exec handler Was going to find that later on, so you could also run what you typed above

P.S.: That's from CODEX; you'll have to use AOBs to find that block -- all of that is in the same block -- in yours, if you play any other version with different EXE.
J

Understood. Good to know that.
S

Finally got around to playing this game. Not going to make a full table, just little things here and there.

Better Wingsuit Boost
--Longer Lasting Boost - This is not technically infinite, but the drain is significantly reduced, changed from a factor of 5 to 10000. With this, you'll still be able to fly from one end of the map to the other, so that infinite feel is still there. This also cuts off the boost immediately after letting go of the key, so you wont have to open your parachute or disable the cheat in order to stop boosting.

Unlock Grappling Hook Mods - This will let you unlock any grapple mods without having the required number of gears.

So I noticed that weapons in this game were extremely underpowered, especially one of my favorites, the RPG that fires 4 missiles (what a joke).. I wanted to make it a little more destructive, make it shoot 30 missiles each shot perhaps. But how would you go about that??

Let's start with taking a look at the instruction that writes your ammo value: 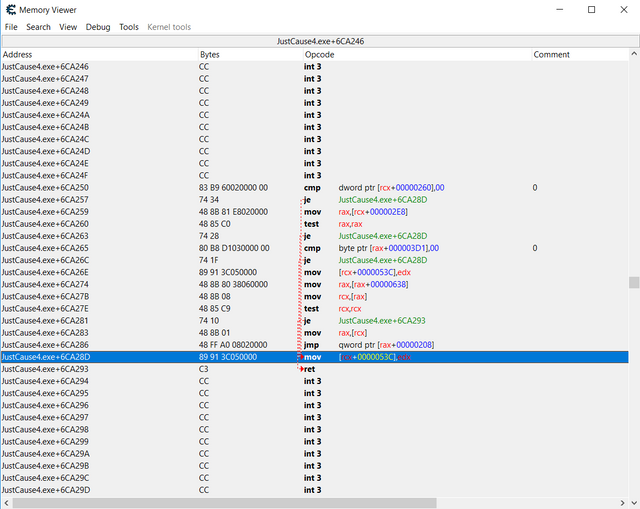 As you can see here, nothing is directly modifying EDX, so let's trace back farther up the call tree. 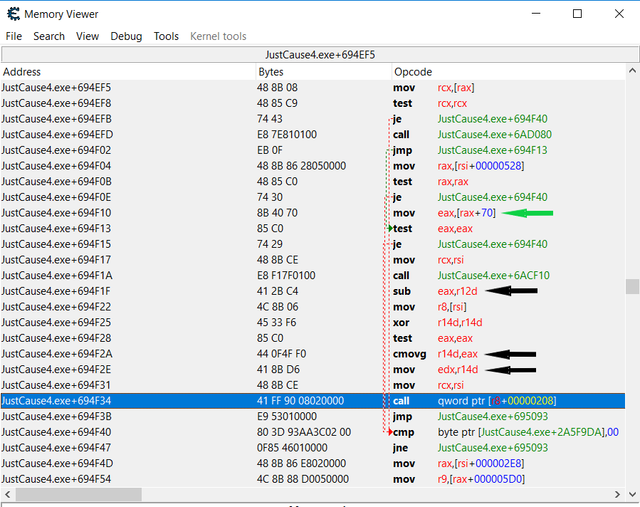 Code:
is what is responsible for writing your ammo value every time you shoot. Two instructions above that, you'll see that EDX gets its value from R14. Nothing interesting about it, but now we want to pay attention to R14. Right above that, R14 gets modified by EAX. Again, nothing special about it, but we now follow EAX. A bit farther up, you finally see where the subtraction takes place:

Code:
This is what is responsible for decreasing your ammo value. So using the example above, you have 80 bullets in your clip and you take a shot. EAX which holds the value of 80, gets subtracted by R12d, which holds a value of 1. EAX then gets moved into R14, R14 gets moved into EDX, which ends up getting moved into your ammo address. Blah blah blah..

Anyways, right above the sub instruction there is another Call. For the sake of saving some time here, tracing that Call led nowhere interesting. So continuing on, still following EAX since it holds our ammo value, I see this instruction:

Code:
Something we can use! Right-click on the instruction>'Find out what addresses this instruction accesses'. Take a few shots with the machine gun and I see one address populate with a static value of 80, max clip size perhaps?! Switching over to the RPG, I take another shot, and a static value of 1 pops up. 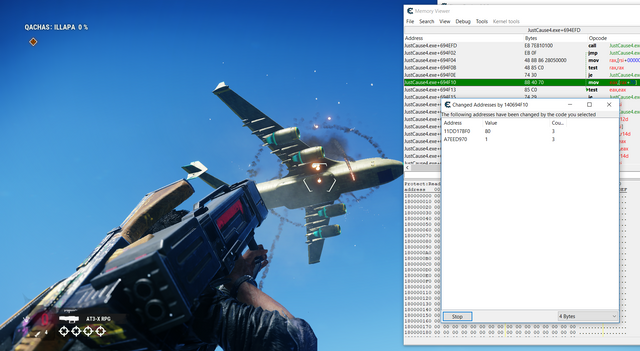 Using the RPG value, we can open it in Dissect Data to make things a bit easier. As we've found out above, offset +70 holds max clip size, changing that value and reloading confirms it. 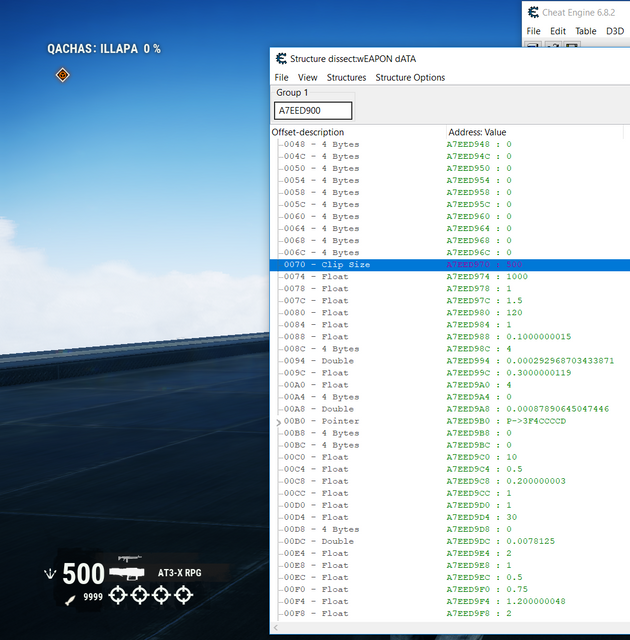 But what the hell else are we looking at?! Well, any modder worth a damn that has modded this game before could probably tell you that you're looking at Weapon Data! It's the same exact layout of data in the files they change to make their fancy mods.

Now this is where the fun part comes in, start messing around with different values and see how the behavior of the weapon changes. Notice offsets +88 and +8C. I was immediately drawn to these since at +88, 0.1 was an obvious fire rate value, and at +8C there was a value of 4, the amount of rockets fired by the RPG. So I changed those values to 0 and 30 respectively. Sure as shit, I fired off 30 rockets in rapid succession!

After testing out different weapons, I came to the conclusion that offset +8C fell along the lines of # of weapon fire iterations rather than # of projectiles per shot, big difference between the two. Making a script for that value would likely cause unexpected behavior in other weapons, but I tested it out anyways. Long story short, it did. So I ditched that idea.

What else could I do? Then an idea came to me. What if I changed the fire mode from semi-auto to full-auto?! So I started digging around. I brought up the machine gun along side the RPG in Dissect Data and looked for differences. Changed a couple of 0's and 1's, but no change at all. Now take a look at offset +94. It just doesn't make a whole lot of sense, looks more like byte values to me. 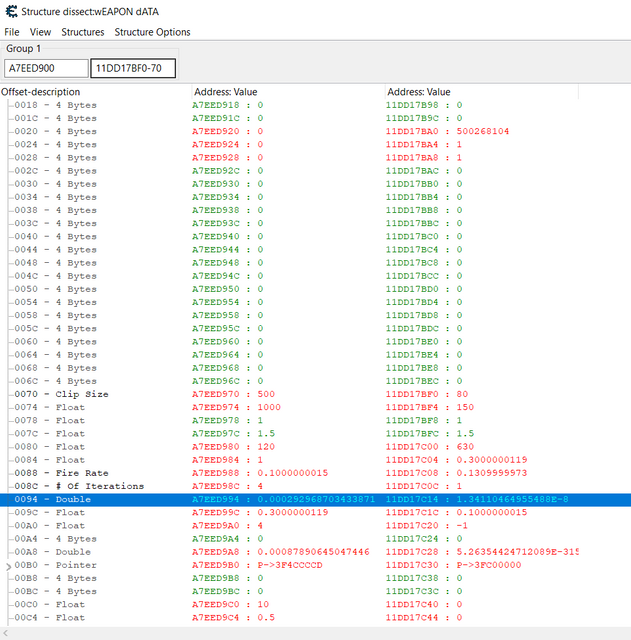 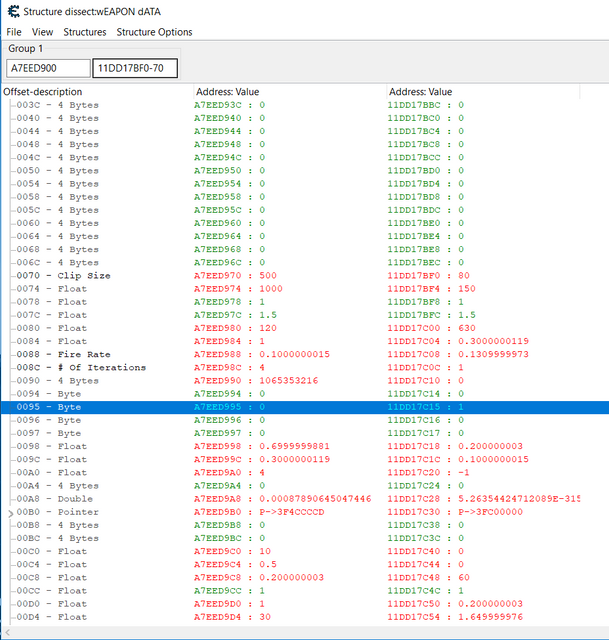 Changed offset +95 from a 0 to 1 on the RPG and proceeded to fire it. I held down the mouse button and it fired off rockets indefinitely, well until my clip ran out or until I let go. But that was it, the flag for 'Is Automatic'. Even better right!!
EDIT - One thing I forgot to include in the pictures was offset +90, time in between shots, to use in conjunction with Is Automatic/Fire Rate.

I still kept looking around and stumbled upon this offset here, +B8. This is an important one! Take a look.

That would be the flag for 'Is Inf Ammo'! There is a lot more in this structure by the way, velocity, deviation and such. But I did what I came here to do, and that was to make one badass rocket launcher!! Using all of this together and you get this: 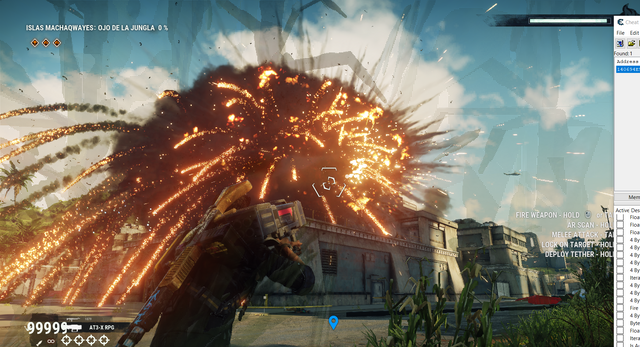 Who needs mods when you have Cheat Engine lol.

What can you do with this info? Well, you can mess around with these values yourself in the meantime, I'll come up with pointers to everything later. If you like to take the modding route, you can use some of the offsets you find as reference to mod the weapon files easily. You can also apply this method in other games as well to go about finding fire rate and such, as this is a more proper way to do so.

Hope this helps!
A

Hi, i hope its allowed to ask, because i'm new here:

How do i use the the equipweapon part, am i able to give myself specified weapons with this?
And if so, what are the id's or weapon-names i have to use?

Could you please advice me... In short, I've stuck in Rage 2 inside bunker with all autosaves in that bunker and last manual save almost at beginning of the game (while currently I've completed most of map markers).
I've tried to glitch through textures (partially successful, as this bunker is surrounded by collision box, blocking everything), to cheat my map position (got almost 400k values that won't filter out), to find my running speed so I can ran through collision box (found something very close, but changing it doesn't do anything), everything without any luck.
I know that Rage 2 is made on Apex engine. Maybe you know what else I could do to get out of that bunker?
You must log in or register to reply here.
Share:
Facebook Twitter Reddit Email Link
Top