Dishonored: Death of the Outsider [Engine:VoidEngine] 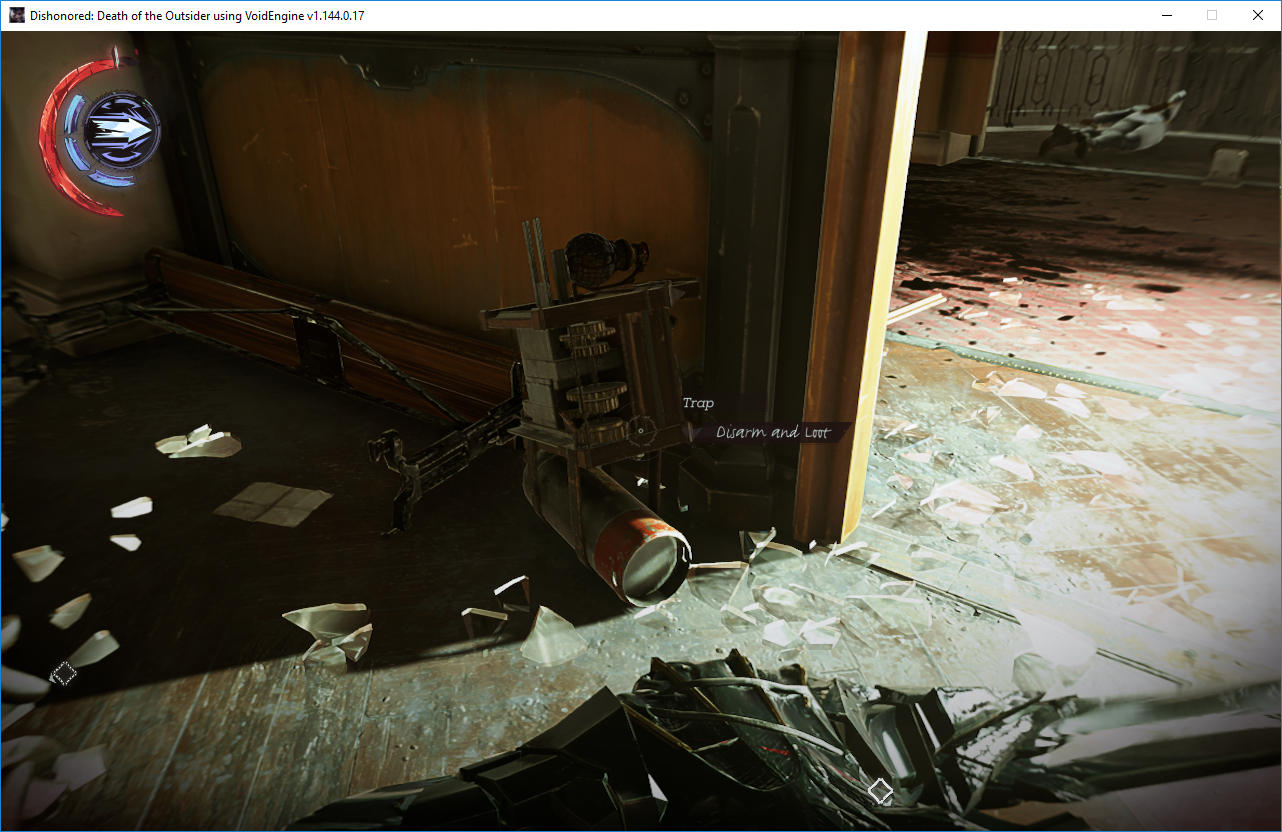 Been playing this game for the past 1-2 weeks, as I've not finished it and I thought I might share with ya the compilation I'm using. Includes various scripts from Dishonored 2 from several people I'll mention at the end of this post: 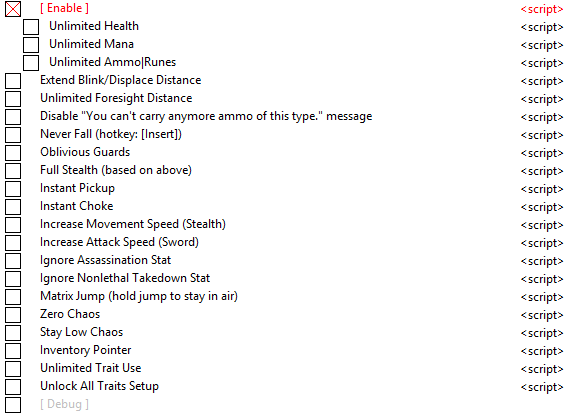 1) For Health, Mana, Ammo - - activate [Enable] script, then activate any of the scripts that show-up below it

2) The rest are self-explanatory.

3) If you want to use the Inventory Editor, first activate Inventory Pointer script, then go back in-game. Resume game so pointer is acquired. Get back to CE and activate Toggle Inventory Editor script. Scroll through the list and find what you want to edit. Now.. for Powers you do not yet own (such as those from OG+), find them in the list - - they're close to the bottom - - set Value to 1 for each (you got Blink, Dark Vision and Domino), making sure you click Set Value button. Add anything else you want to access early in the game (such as the missing[?] Stun Mines). Close editor. Get back in-game, F5, then F9. You should now see all in your list (yes, they are activated during load of the savegame). 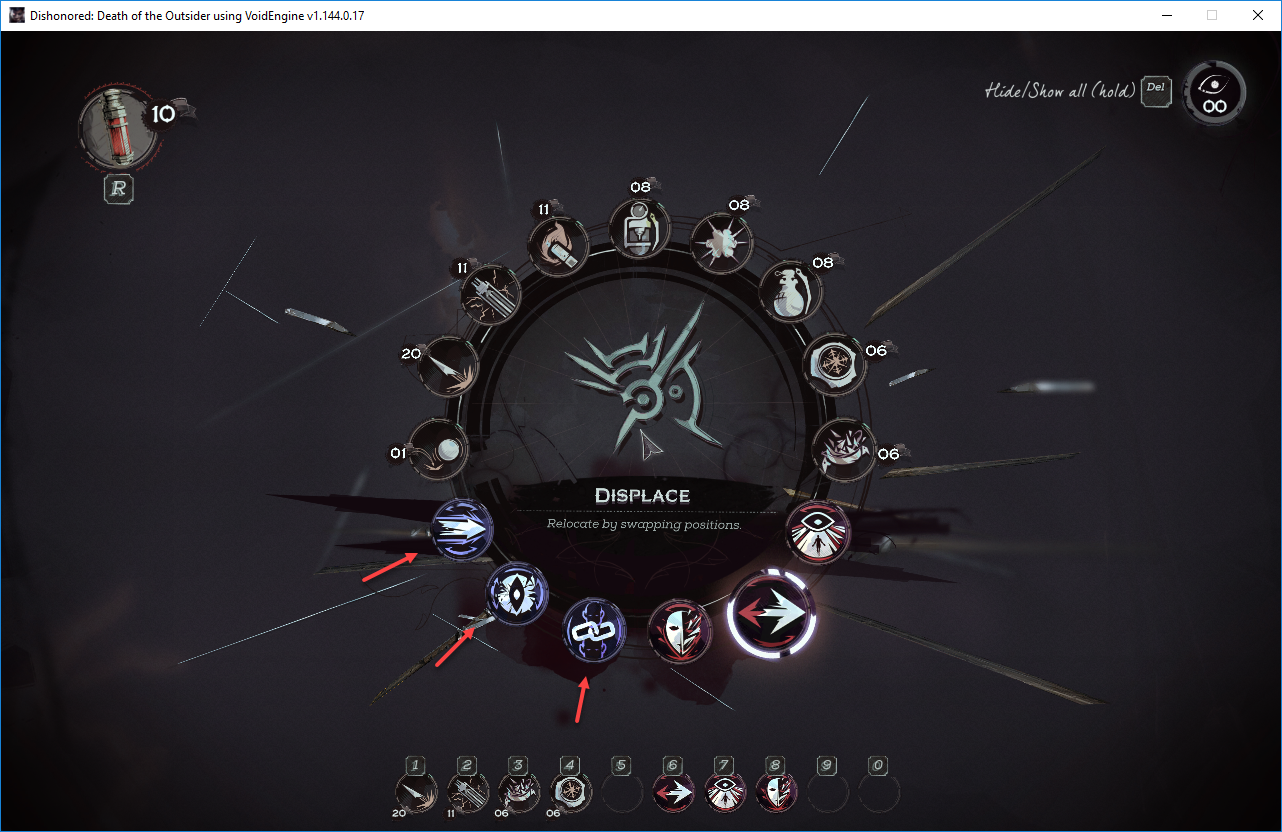 4) If you want to edit your Current Mission, Playthrough or Global stats, you'll have to fix the two scripts yourselves (they're in the [ Debug ]) section. Can't be arsed with them anymore as I don't really care for that shit (no OCD here).

Thanks once again there Sunbeam! :mrgreen:

All works, thanks so much :3
D

the game carshe when i push on ENABLE! CTD no matter what

Hey SunBeam,
I constantly have CTD while using your table? can you please explain, what am i doing wrong?

Think that's the December 2018 update, might just have removed Denuvo same as what happened to Dishonored 2 before it so reverting the update to the 2017 patch before it should work without any loss of other functionality. (Startup time is going to be a bit worse though.)

Steam should really have a better way to roll between updates both for compatibility and fixing mistakes if the latest addition breaks more than it fixes but for now it has to be done through the command console.

Want the 2017 update and compare to the 2018 update but since it's only the binaries depot (EXE being what we're after.) and not the full 40 - 60 - 100 whatever gigabyte file size of current games the last manifest can also be done without to just download it in full.
(Modern games are kinda big now after all so it's handy to only grab what needs to be downloaded.)


EDIT: Oh yeah this ends up somewhere around here.

Downloading or Depotcache or somewhere and a folder with the files to be copied over to where the game is actually installed.

EDIT: Oh and just for mentioning it and nothing more but can't download from Steam without having the game actually owned on that client so if it's a modified release (Which of course they'd use the unprotected game exe in the newest version.) it won't be doing much just saying.

Basically just covering everything and trying to be detailed without a massive wall of text "Do this." and then dozens of lines of overly wordy explanations and how-to steps when the guide is right in that Steam Reddit discussion covering the major bits only needing for the game specific ones to be filled out helpfully handled via SteamDB for depots and manifests.
(Well reverting to a version of the game with the DRM in place wouldn't really work if the DRM can't authenticate or license due to lack of ownership but well that's covered too now. )
D

Ik this is dead for quite sometime.. but... if anyone still has the game can be kind and generous to update the mana and money pointers. will really appreciate it <3
You must log in or register to reply here.
Share:
Facebook Twitter Reddit Email Link
Top